A video has been viewed tens of thousands of times in Facebook and Twitter posts purporting to show Taliban atrocities in Afghanistan's Panjshir province. However, the video has been shared in a misleading context; it shows a scene from a fictional movie from 2017.

The video was shared in a tweet on September 11, where it has been viewed more than 30,000 times.

"Hundreds of Afghans in Panjshir are being held in containers, beaten up & kept hungry for days with many of them losing their lives. Those being tortured & killed aren’t enemies of Islam and in fact are more Islamic than Talibs. How can @UN @suhailshaheen1 @UNHumanRights go blind?" the tweet reads.

Suhail Shaheen is a Taliban spokesman. 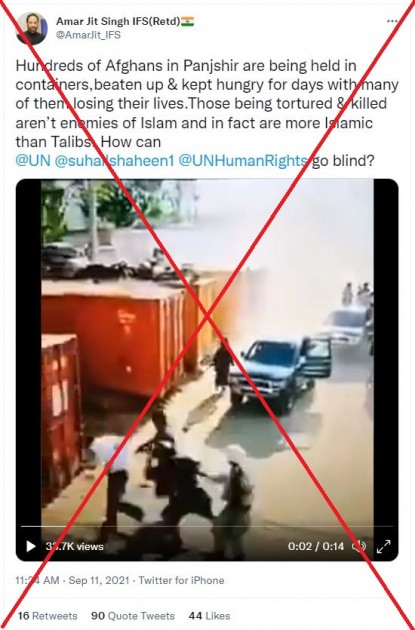 Panjshir -- located north of the Afghan capital Kabul -- was the final holdout province resisting Taliban rule. The group declared victory in the province in early September.

Afghanistan's ambassador to the United Nations urged the body to enforce sanctions on the Taliban -- who he accused of "widespread atrocities" in the Panjshir Valley -- including executions and blocking humanitarian aid.

Some social media users appeared to believe the footage shows a real incident in Afghanistan.

"These citizens need to be armed and fight against the Taliban terrorists when they try to kill them," one person commented.

"Shipping containers seem to be a thing there... they don’t have ventilation," another wrote.

A reverse image search using keyframes captured from the video, combined with keyword searches, found it corresponds to a longer video posted to YouTube on December 29, 2017.

The Persian-language title of the longer video reads: "The Taliban / The Clouds".

According to the video's description, the clip is taken from feature film "The Clouds", written and directed by Sediq Abedi. The film is also known as "The Taliban".

"The story of the film depicts the crimes of the Taliban from Kabul to the borders of Afghanistan in the Amu Darya," it reads.

"Watching this film informs the viewers about the violence, atrocities and crimes of the dark period of the Taliban".

Below is a screenshot comparison of stills captured from the video in the misleading posts (left) and the YouTube video (right):

Filmmaker Abedi has written and directed various films, including "A Man's Desire for a Fifth Wife". It was screened at the International Film Festival of India (IIFI) in 2013.

India's Ministry of Information & Broadcasting also uploaded a press conference on YouTube from the IIFI in which Abedi discussed his above-mentioned film.

Abedi's name appears in the opening credits of the film as its director, producer and writer, seen here at the one-minute 40-second mark of the video.

A fact check published by India Today found that he also starred in the movie.

Below is a screenshot comparison showing stills of Abedi starring in the film which was shared in misleading posts (left) and Abedi at the press conference in 2013 (right):