This photo shows a blast in Pakistan's Lahore in 2017

Reports circulating on social media in Pakistan purport to share a photo of the aftermath of a bomb that "killed at least 25 soldiers" in Lahore in September 2021. The posts are misleading; while the photo genuinely shows a blast in Lahore, it is an old picture taken after a gas explosion in 2017 in which no soldiers were reported dead. AFP found no credible reports of a bomb blast in the city in September 2021.

"A bomb blast near the northern city of Lahore has killed at least 25 Pakistani soldiers," reads a Persian-language tweet posted on September 22.

It shows a photo of smoke rising from a building and cars with smashed windows and covered in dust parked outside. 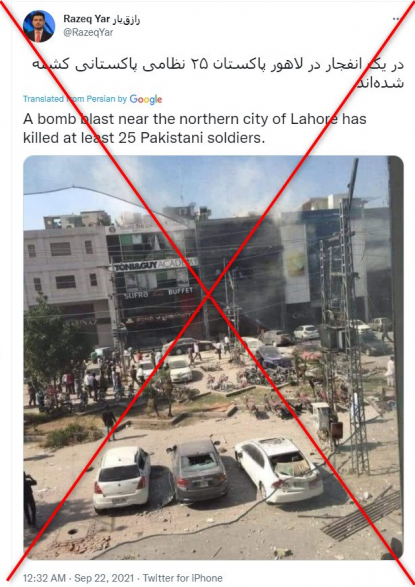 Screenshot of the misleading claim shared on Twitter, taken on September 24, 2021

"In Lahore, six people were killed and fifteen injured in an explosion in under constriction building at Y Block of Defence area of the city today," the post reads.

Below is a screenshot comparing the image in the misleading posts (left) with the one posted by the Pakistan government account in 2017 (right).

Screenshot comparing the photo in the misleading posts (L) with the original from 2017 (R). Taken on September 24, 2021.

The photo was also posted here in 2017 by Pakistani news outlet The Express Tribune.

"Initially, there was confusion about the nature of the explosion at Z-Block of the Defence Housing Authority (DHA), which is replete with upscale boutiques and cafés, but more than eight hours later the police concluded it was an accidental blast caused by gas cylinders," The Express Tribune reported.

None of the deaths reported at the time were of soldiers.

AFP found no credible reports of a bomb blast in Lahore in September 2021.