Health experts warn against standing on one leg to diagnose stroke

A video viewed hundreds of thousands of times recommends standing on one leg to diagnose stroke. The claim is misleading: while research suggests the ability to balance on one leg is an indicator of brain health, neurologists told AFP it was not a reliable way to diagnose a stroke. They said anyone with symptoms such as difficulty speaking; facial drooping; or weak limbs; should seek urgent medical help.

"Anyone who has blood vessel damage to their brain will not be able to stand on one foot for more than 20 seconds," reads a Thai-language Facebook post published on September 15.

"This is probably true because I just did a brain MRI and my doctor told me my blood vessels are damaged. I then found this clip and I could only do it for three seconds. Let's test if your brain's blood vessels are still normal". 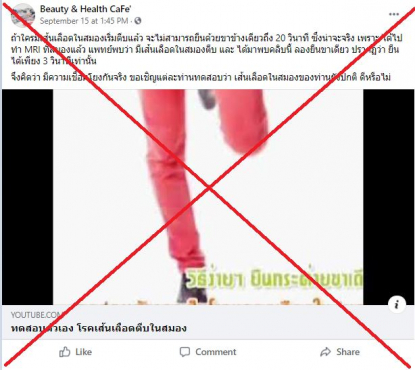 The post links to a YouTube video from 2017. It is titled: "Test yourself for ischemic stroke". It has been viewed more than 380,000 times.

An ischemic stroke is one of two types of stroke caused when blood clots or other particles block the blood vessels to the brain, according to the US Centers for Disease Control and Prevention (CDC).

The video features a photo of a woman standing on one foot. It also shows various people claiming that if a person cannot stand on one leg for more than 20 seconds, it could indicate a problem with the blood vessels in their brain.

"It was not easy to do. I couldn't do it. Should I go see the doctor?"

Another commented: "I could do it, so I'm still healthy".

A keyword search found an article published by the American Heart Association on December 18, 2014. It is titled: "Ability to balance on one leg may reflect brain health and stroke risk".

The research suggested that struggling to balance on one leg for 20 seconds or longer was linked to an increased risk for small blood vessel damage in the brain and reduced cognitive function.

However, health experts say that standing on one leg is not a reliable way to diagnose stroke.

"The inability to stand on one leg could be a result of joint or nerve problems. Therefore, this test is not an accurate way to test if someone has a brain problem," he said.

"The diagnosis of stroke requires more than just one criterion. Relying solely on just one method could cause a great misunderstanding".

The most prominent symptoms among stroke patients include difficulty speaking, Bell's palsy -- a weakness or paralysis on one side of the face -- and weakness of arms and legs, he said.

"If you experience these symptoms, you should go to the nearest hospital immediately."

Dr Tassanee Tantirittisak, the President of  Neurological Society of Thailand, also said that standing on one leg is not a reliable way to diagnose ischemic stroke.

"This is not the method used to detect brain problems," she told AFP. "The diagnosis of a stroke patient requires medical assistance as well as medical technologies such as brain X-ray or MRI which are more accurate".

The CDC also includes sudden numbness in the face, arms or legs, and sudden vision problems in its list of stroke symptoms. 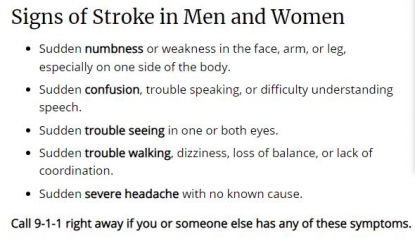