A photo has been shared in multiple social media posts that claim there was a meeting between five international intelligence agencies in the Indian capital of New Delhi, namely India's Research and Analysis Wing, Israel's Mossad, Russia's KGB, the UK's MI6, as well as the CIA from the United States. However, the photo has been shared in a misleading context; it actually shows a delegation-level meeting of national security advisors from India and Russia.

The photo was posted here on Facebook on September 16, 2021. 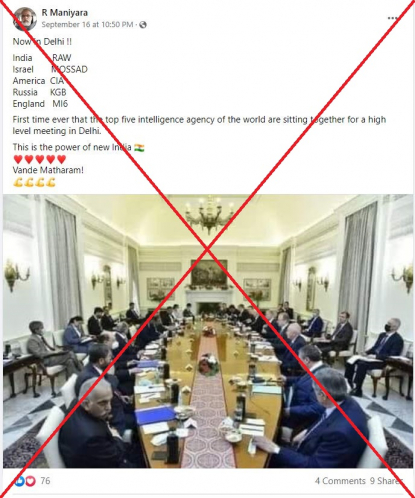 The caption of the post reads "Now in Delhi !! India RAW, Israel MOSSAD, America CIA, Russia KGB, England MI6. First time ever that the top five intelligence agency of the world are sitting together for a high level meeting in Delhi. This is the power of new India. Vande Matharam!"

Vande Mataram is the title of a poem by Indian novelist Bankim Chandra Chatterjee from the 1870s which later became a slogan for the Indian independence movement. It translates to "Praise thy motherland".

The image has been shared alongside similar claims on Facebook here and here; and on Twitter here, here, and here.

A Google reverse image search found the image was published here in a report by Indian news outlet Hindustan Times on September 8, 2021.

Below is a screenshot comparison of the image used in the misleading posts (L) and the image from the Hindustan Times news report (R):

The photo caption reads: "A delegation-level meeting of national security advisors between India and Russia."

The report describes a delegation-level meeting of national security advisors from India and Russia, where they discussed the situation in Afghanistan following its takeover by the Taliban, and the implications that may have on India, Russia, and the Central Asia region more widely.

The image in the report is credited to Asian News International (ANI), an Indian news agency. ANI published the image on September 8, 2021, in a tweet about the same meeting in Delhi between Indian and Russian national security advisors.

A press release published by the Indian government on September 8 confirmed a visit to India by Nikolai Patrushev, the secretary of the Security Council of the Russian Federation to India.

The Embassy of the Russian Federation in the Republic of India also released a statement on the same day about the meeting. The statement says that Patrushev spoke to India's National Security Advisor Ajit Doval about India and Russia's bilateral ties in the field of security.

There is no mention of representatives from the United States, Israel or the United Kingdom being present at the meeting.