Two photos have been shared repeatedly on Facebook alongside a claim they show South Korean President Moon Jae-in delivering a speech to an empty room at the United Nations General Assembly. The claim, however, is misleading. The images were taken during a preceding event at the UN building addressing climate change. Moon delivered a keynote address at the General Assembly one day later in front of a crowd of delegates.

The images were shared here on Facebook on September 22, 2021. 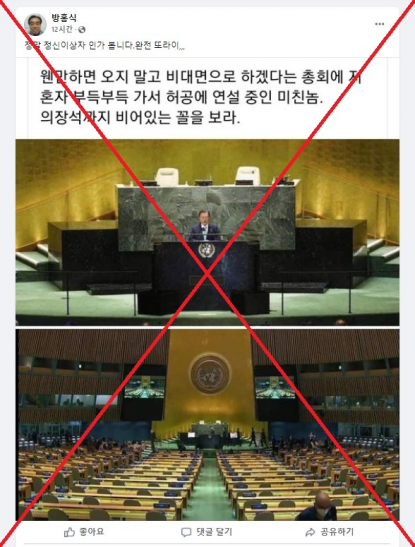 Screenshot of the misleading claim shared on Facebook. Captured September 23, 2021.

The post's Korean-language caption translates to English as: "This crazy [person] insisted on going alone to the General Assembly, which was meant to be held without face-to-face contact, and is giving a speech in front of an empty crowd. Look how even the podium chairs are empty".

The top image shows Moon standing alone at a podium at the United Nations.

The second image appears to show the same UN General Assembly hall, with hardly anyone seated.

Moon attended the UN General Assembly at the UN headquarters in New York City during a three-day trip from September 19 to 21, 2021.

The event was reported in a press release from South Korea's government.

Identical images were shared on Facebook here, here, here and here alongside a similar claim.

The photos shared on Facebook do not show Moon attending a meeting of the UN General Assembly.

In fact, they show him delivering an introductory speech for the South Korean pop group BTS at a UN event designed to promote the advancement of climate goals.

He spoke at the opening ceremony of the Sustainable Development Goals Moment, a UN event designed to promote the advancement of climate goals.

A video of the event on September 20, 2021 can be seen below on the UN's official YouTube channel:

Below is a screenshot comparison of the first image shared on Facebook (L) and a similar photograph of Moon's address at the SDG Moment from Getty Images (R):

Below is a screenshot comparison of the second image shared on Facebook (L) and a corresponding screenshot at the 7 minute and 19 second mark of a video of the event posted on the UN's YouTube channel (R):

The video's description reads in part: "Remarks and introduction to Special Guest by His Excellency, Mr. Moon Jae-in, President of the Republic of Korea Remarks and performance by BTS, Special Presidential Envoy for Future Generations and Culture."

The next day on September 21, 2021, Moon delivered his official keynote address at the 76th session of the UN General Assembly.

It can also be seen on the UN's YouTube channel here. 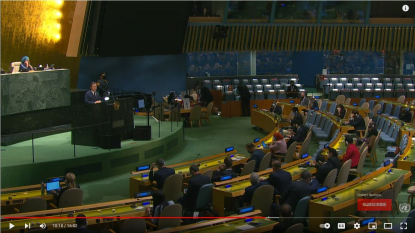 The video shows Moon's speech was attended by an audience of delegates. Two figures can be seen chairing the event from the hall's upper podium.

Moon's keynote address at the General Assembly has been documented by photos and videos in various news reports, including here, here and here.

Moon was not the only world leader to attend this year's General Assembly meeting in person.

More than 100 heads of state and government delivered addresses at the event, including US President Joe Biden and Indian Prime Minister Narendra Modi, according to news reports here and here.

All speeches delivered by the leaders at the event can be watched on the UN's website here.