Skip to main content
A boat sails on the Seine river in Paris on September 5, 2019 ( AFP / LIONEL BONAVENTURE)

'Nature is healing': Posts mislead on impact of Covid lockdowns on the environment

Facebook posts circulating in Sri Lanka claim Covid-19 lockdowns imposed around the world resulted in nature "restoring itself". The posts claim that the lockdowns caused air pollution to drop "two-three fold"; prompted a drop in global temperatures, and even helped the ozone layer to "recover". The posts are misleading, according to environmental experts, who said they oversimplified environmental changes in 2020-21. Lockdowns likely had a "minimal" impact on global warming and any reductions in air pollution were not universal, they said.

"As air pollution drops two-three fold due to corona [lockdowns], as animal slaughters reduce and global temperatures drop, the most positive news is that the ozone layer has been recovering speedily," it reads.

"See how well nature has sidelined man that destroyed the planet and is restoring itself". 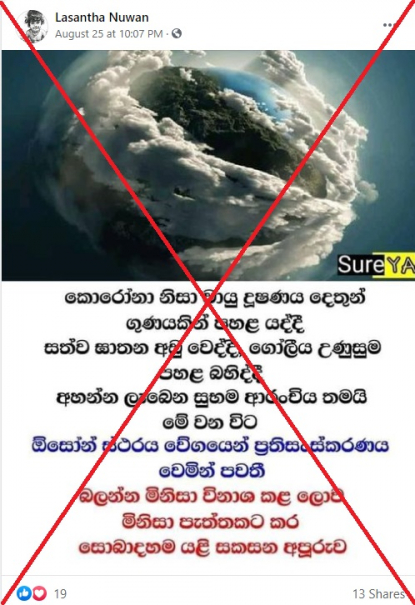 A screenshot of the misleading post taken on September 22, 2021

Countries around the world have imposed varying degrees of lockdowns in a bid to curb the spread of coronavirus.

Similar claims were made on Facebook here and here.

While there is evidence that lockdowns led to improved air quality in some cities and countries in 2020, the post exaggerates the impact they had.

The 2020 World Air Quality report found 65 percent of global cities and 84 percent of countries have experienced air quality improvements since 2019.

Lockdowns and travel restrictions led to "a dramatic short-lived fall in emissions of key air pollutants in 2020", according to this release from the World Meteorological Organization (WMO) published on September 3, 2021.

The release notes, however, that "there were episodes of both improvement and deterioration of air quality in different parts of the world".

In Sri Lanka, not all cities saw improvements in air quality during this period.

According to the World Air Quality Index project, a PM2.5 level of between 12.1 and 35.4 indicates "moderate" pollution.

In fact, according to NASA, lockdowns had a "minimal" impact on reducing the effects of climate change.

In 2020, the Earth's global average surface temperature tied with 2016 as the warmest on record, the space agency said.

CO2 concentrations continued to increase despite a fall in the amount of carbon dioxide emissions, it said.

The report reads: "These shutdowns also appear to have reduced the amount of carbon dioxide (CO2) emissions last year, but overall CO2 concentrations continued to increase, and since warming is related to cumulative emissions, the overall amount of avoided warming will be minimal".

Environmental experts told AFP it was incorrect to state the lockdowns helped the ozone layer to "recover".

"The ozone hole has been disappearing for years mainly due to the 1987 Montreal protocol," Bagtasa said.

The Montreal Protocol was a landmark environmental agreement regulating the production and consumption of ozone-depleting substances (ODS).

"To date, the Parties to the Protocol have phased out 98 percent of ODS globally compared to 1990 levels," according to the United Nations Environment Programme.