An image has been shared in multiple social media posts alongside a claim it shows Singapore's prime minister Lee Hsien Loong "queue[ing] up for the Covid-19 vaccine with the citizens" of the city-state. But the claim is false; the photo predates the Covid-19 pandemic. It has circulated online since 2014 in reports about Lee queuing up for fried chicken wings.

"See how Singapore's prime minister Lee Hsien Loong went to queue up for the Covid-19 vaccines with the citizens," reads the Chinese-language text overlay to a photo published here by a Taiwan-based Facebook user on September 17, 2021. "What is democracy? DPP – can the privileged officials do that?"

The post's traditional-Chinese caption reads: "How did the DPP's senior officials and privileged class take their 'secret vaccines'? Please share it with the public and 'Compare'!" Lee Hsien Loong had his Covid-19 booster shot on September 17, 2021 at the Singapore General Hospital, as reported here by The Straits Times and streamed here on Lee's official Facebook page.

An identical photo was also shared on Facebook here and here alongside a similar claim.

But the claim is false. The photo predates the coronavirus pandemic and has circulated online in reports about Lee queuing up for fried chicken wings in a food market in 2014.

A reverse image search on Google has found the same photo published here by a Singapore-based news organisation, Asia One, on June 13, 2014. 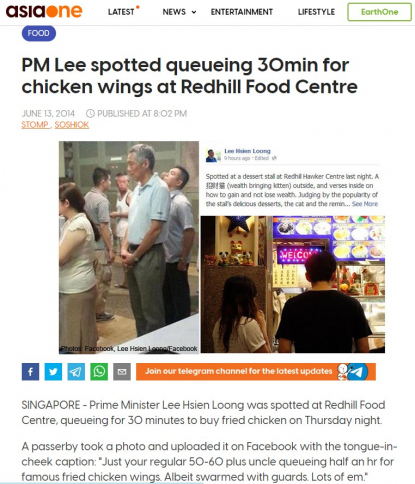 Below is a screenshot comparison of the photo in the misleading posts (L) and Asia One's photo (R): 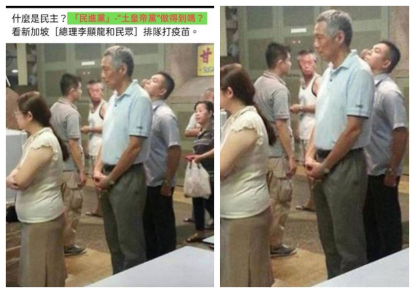 The food stall can be seen in this Google Maps imagery of the Redhill Food Centre in south Singapore.

A closer observation of the stall's image on Google Maps found that a news report of Lee's visit was also displayed on the stall.

A screenshot comparison of the photo in Google Maps and a photo of news report about PM Lee's visit.

Lee also posted about his visit to the hawker centre on his Facebook page on June 13, 2014.

Lee's outfit in the photo in the misleading posts does not match the clothes he wore when he received his Covid-19 booster jab.

A screenshot comparison of the photo in the misleading post and the screenshot taken from PM Lee's Facebook livestream.