An image has been shared thousands of times in social media posts that claim it shows a painting of a Hindu deity displayed at a palace in Afghanistan's Panjshir province. The claim circulated online after the Taliban seized control of Afghanistan and vowed to impose Islamic sharia law. The claim is misleading: the painting was created by a Russian artist who told AFP it has no connection to Afghanistan.

The caption reads in part: "This painting exists (don't know for how many days more) in the Panjsheer Palace in the erstwhile Gandhara kingdom of Mahabharata time, the present day Afghanistan".

The post has been shared more than one thousand times.

Gandhara is a historical region in what is now eastern Afghanistan and northwestern Pakistan.

The Mahabharata is a Hindu epic poem that tells the story of an 18-day long battle between two rival families: the Kauravas and Pandavas. 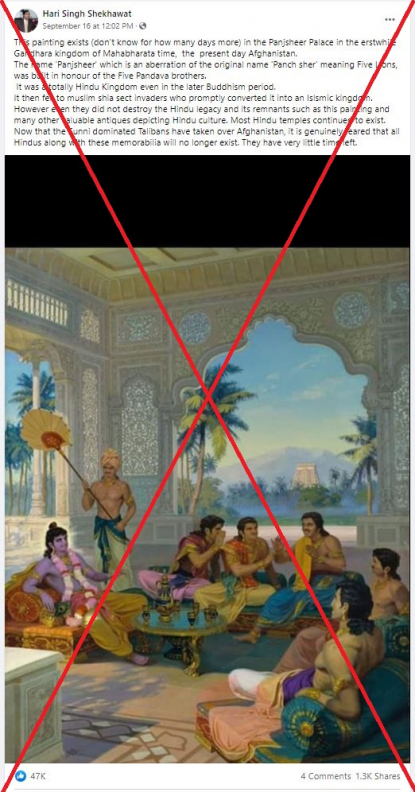 The painting shows the Hindu deity Krishna and the Pandavas sitting together.

The caption goes on to claim: "Now that the Sunni dominated Talibans have taken over Afghanistan, it is genuinely feared that all Hindus along with these memorabilia will no longer exist. They have very little time left".

The post circulated online after the Taliban seized power in Afghanistan. The hardline Islamist group said they celebrated victory after laying claim to the Panjshir mountain valley in early September 2021.

The image has been shared alongside a similar claim on Facebook here and here; and on Twitter here, here, and here.

Some posts also claim that the painting depicts a palace in Panjshir -- for example on Twitter here and here.

A reverse image search on Google found the image is identical to this painting called "Krishna and the Pandavas".

It was pictured on the website for Art Spb -- a Russian art gallery -- and credited to Russian artist Rasikananda. 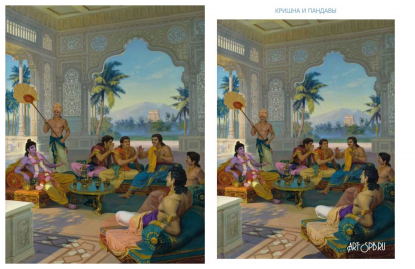 Rasikananda Das was born in the Russian city of Komsomolsk-on-Amur, according to the art gallery's biography.

He is a member of the Creative Union of Artists of Russia and the International Federation of Artists, it states.

He told AFP that the painting is an original work he created while in the Russian city of Sochi in the year 1999.

He refuted the claim that the painting depicts a palace in the Panjshir region, or that it is linked to Afghanistan in any way.

"The subject for this illustration is from Srimad Bhagavatam, 7-th canto. This painting is my original creation and it is not Panjshir at all," he said.

Srimad Bhagavatam -- also known as the Bhagavata-purana -- is a well-known Hindu literary epic, composed in Sanskrit.

Das said he had sent the original painting to the Sweden Bhaktivedanta Book Trust (BBT) archives in ISCKON Temple Korsnäs Gård in 1999.

He said he was not aware of any copies or replicas made by other artists.

ArtSpb -- the art gallery website which hosted an image of the painting -- told AFP that Das sent the artwork to the BBT publishing house in Sweden in 1999.

AFP has previously debunked claims that Hindu deities had been displayed on billboards in New York's Time Square.