This image of a South Korean presidential candidate has been doctored

The image was shared here on Facebook on September 16, 2021.

The image shows Hong Joon-pyo -- one of the presidential candidates from the country's main opposition People Power Party (PPP) -- holding a placard. 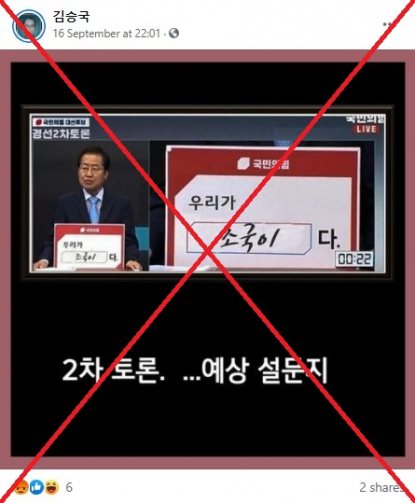 The message on the placard appears to read: "We are Chokuk".

"We are Chokuk" is a popular slogan among supporters of South Korea's former senior presidential secretary Cho Kuk.

He resigned in October 2019 after a scandal over academic privileges allegedly given to his children, AFP reported here.

The superimposed text on the image reads: "Expected answer at the second debate".

The PPP's second presidential candidate debate is scheduled for September 23, 2021.

An identical image was shared on Facebook here and here alongside a similar claim.

However, the image has been digitally doctored.

A combination of keyword and reverse image searches found this video on YouTube posted by the PPP on September 16, 2021.

The video shows a recording of the first policy debate for the PPP's presidential candidates -- including Hong --- held on September 16, 2021.

It was aired by South Korean broadcaster TV Chosun.

During the debate, participants were asked to write down one sentence on a banner to describe themselves.

At the clip's 12-minute 57-second mark, Hong can be seen holding a placard that reads: "I am Muyahong".

This is Hong's campaign slogan. It translates as: "No matter what, Hong is the only candidate [you should vote for] from the opposition".

Below is a screenshot comparison of the doctored image (L) and the original video (R):