Facebook posts claim a picture of a child featured on the wrapper of popular Indian biscuit brand Parle-G is charity head Sudha Murty when she was a girl. The claim is false. The company said the child on the wrapper was "just an illustration", while a spokesperson for Murty said she was not the girl in the picture.

"The girl pictured on the Parle-G biscuit packet is now an 80-year-old woman," reads a Bangali-language Facebook post from September 15. "The first picture was taken when she was 4 years and 3 months old".

The post features a photo of a woman next to a picture of a packet of Parle-G, a popular Indian biscuit brand.

The same picture was shared in similar Facebook posts here, here, and here.

"We will like to clarify that the kid on Parle G pack is just an illustration," a representative for Parle-G told AFP. "The said illustration was made in the 1960s by Everest creative team."

A reverse image search found the photo of the woman corresponds to this image published by Indian newspaper Mathrubumi on March 15, 2019.

The report identifies her as Sudha Murty, chair of the Infosys Foundation, which supports education, healthcare and rural development programmes in remote regions in India. 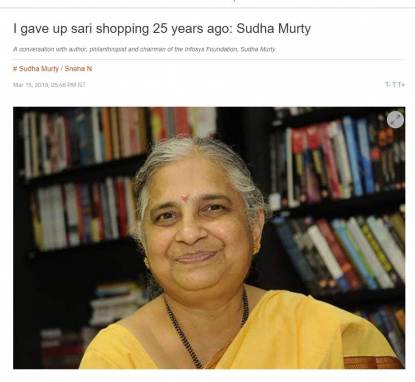 A representative for the Infosys Foundation also debunked the misleading posts.

"We would like to clarify that it is not Mrs. Sudha Murty's picture," the representative told AFP.