A photo has been repeatedly shared on Facebook in South Korea that purports to show the country's intelligence chief Park Jie-won embracing Cho Sung-eun, an alleged whistleblower in an ongoing political scandal. The image, however, has been doctored. The original photograph shows South Korean President Moon Jae-in embracing a supporter during a free hug event held in May 2017; images of Park and Cho's faces have been inserted into the photo.

The image was shared here on Facebook on September 15, 2021. 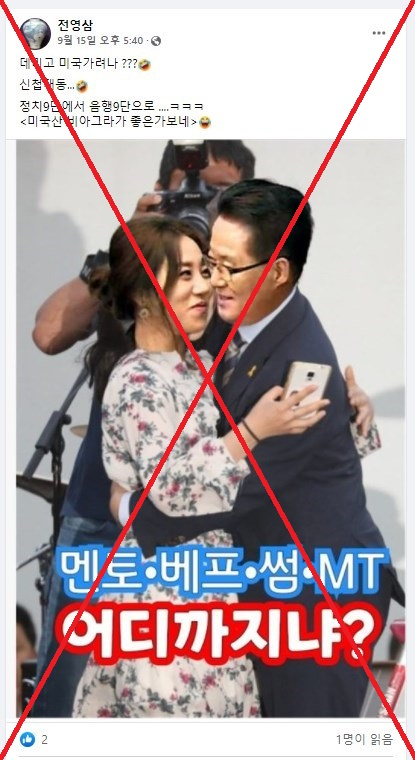 The Korean-language claim reads, "Will he take [her] to the United States? Taking on the new concubine... From a master politician to a master fornicator. American Viagra seems to do the trick."

The Korean text embedded at the bottom of the image reads, "Mentor, best friend, something going on, membership training, how far did you go?"

The man on the right of the image appears to be Park Jie-won, director of South Korea's National Intelligence Service (NIS), while the woman on the left appears to be Cho Sung-eun, CEO of Almight Media.

The pair are accused by critics of being part of a smear campaign to derail the electoral bid of the PPP's Yoon Seok-youl, a former top prosecutor who is running for president in 2022.

According to South Korean daily Hankyoreh, Cho is believed to have leaked allegations to Park that the state prosecution service, at that time headed by Yoon, solicited the PPP to lodge criminal complaints against figures tied to the ruling Democratic Party before elections in 2020.

Critics have claimed the prosecutors' move was an attempt to favour the PPP's chances in the 2020 elections.

The PPP has in turn raised allegations that Cho has conspired with Park to discredit Yoon, according to news reports from The Korea JoongAng Daily and KBS.

Multiple social media users have questioned the nature of Cho and Park's relationship, with some alleging the two shared romantic ties, as seen on Facebook here and here.

The image purporting to show Park and Cho hugging has circulated in a similar context and been shared on Facebook here, here, here and here.

Comments on the posts indicate several users believed the image was genuine.

One user wrote: "The woman in the picture also smiling sneakily. It's not a sexual harassment. They are just having fun."

Another wrote: "This is disgusting. These people. Apologise to the public. [Park] you should resign instead of ruining the country!"

Through a Google reverse image search, AFP was able to trace the image to a photograph published here by Yonhap News on May 6, 2017. 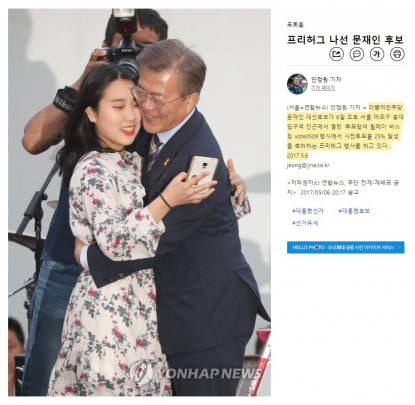 Below is a screenshot comparison of the doctored image shared on Facebook (L) and the original Yonhap photo featuring Moon (R): 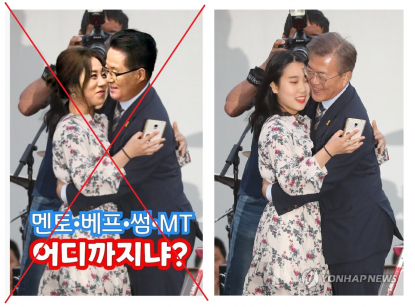 Other photographs of Moon and the supporter at the same event can also be seen in other South Korean news reports, including here and here.