Canadians can mark ballots with pencil or pen

Social media posts urge Canadian voters not to use pencils when marking their 2021 federal election ballots, warning of potential tampering. But Elections Canada says voters are free to use a pen, and there is no evidence of pencils -- which are required to be provided under the country's election law -- leading to fraud.

"Bring your own PEN when voting this year Pencil can easily be erased and changed . Pretty sure the turd will do anything to win this election," says a September 9, 2021 Facebook post. 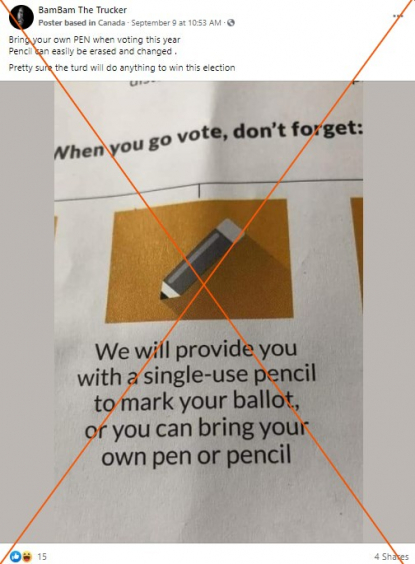 Melissa Baumgaertner, a candidate in Ontario for the right-wing People's Party of Canada (PPC), also tweeted to encourage voters to bring a pen to the polling station. Her tweet was shared as a screenshot on Facebook and Instagram by other PPC candidates and accounts with warnings that pencil "can be erased." 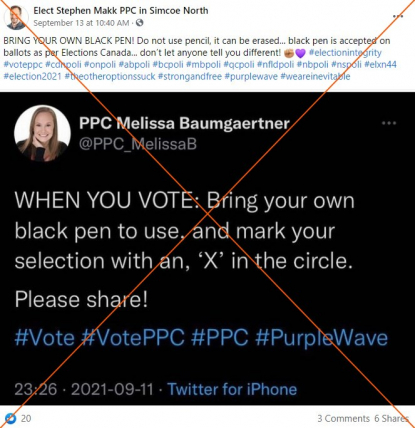 Elections Canada, the agency that oversees the federal election, is required to provide voters with pencils under the Canada Elections Act. The law states: "Each voting compartment shall be placed on a hard and smooth surface and shall have in it a suitable black lead pencil for the use of electors in marking their ballots."

Natasha Gauthier, spokesperson for Elections Canada, told AFP: "Electors are welcome to use their own pen or pencil -- makes no difference (as) long as the ballot is clearly (and) properly marked." 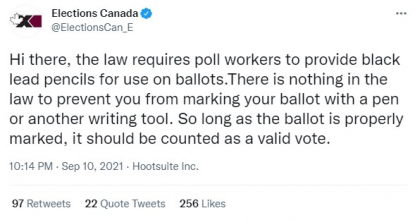 Screenshot taken on September 16, 2021 of a tweet from Elections Canada

Holly Ann Garnett, director of the Electoral Integrity Project, which focuses on the democratic quality of elections around the globe, said that "it's nearly impossible to manipulate ballots after they've been cast" in Canada.

She also said she is not concerned about the use of pencils, a practice that is not new for the 2021 federal election, and has not been shown to increase election fraud risk.

Garnett, who is an associate professor of political science at the Royal Military College of Canada, said Canadians can feel reassured by the voting safeguards in place.

"We have an election management body that is very clearly independent," she said.

Workers at polling stations serve in full view of the public during the vote, and candidates or their representative may observe the process. The ballots are then counted by hand by paid election workers in the presence of observers.

"There is so much transparency. Nobody is doing this by themselves," Garnett said.

If any irregularities are observed, they can be reported to the Commissioner of Canada Elections.

There are legal penalties including fines or jail time for breaking election law.

More of AFP Fact Check's reporting on inaccurate information related to the 2021 federal election can be found here.