A video has been viewed tens of thousands of times on social media platforms alongside a claim it shows health workers attempting to forcibly vaccinate a woman in China. The claim is false: the video has circulated in reports about healthcare workers approaching a woman who "refused to go to quarantine" in Vietnam. A screenshot of the misleading post taken on September 17, 2021

The clip -- which features a logo for central Vietnam's Nghe An province in the top right-hand corner -- shows a partially naked woman being surrounded by a group of people dressed in hazmat suits.

The post's simplified Chinese-language caption translates to English as: "If you are not willing to accept the warmth of the [Communist] party, the party will smash the door open, you have to accept it anyway, otherwise, others will enjoy the superiority of the socialist system and you won't. Are Americans lucky enough to have free door-to-door vaccination?"

China has threatened to ban adults who have not received a Covid-19 vaccine from schools and hospitals, AFP reported here on July 15, 2021.

The video was also shared on Twitter here and here alongside a similar claim.

A reverse image search on Google has found a longer version of the video published here on YouTube by Vietnamese newspaper Nghe An on August 29, 2021.

The video was titled: "Prosecution of the woman who refused to go to quarantine, stripped, and cursed at the authorities". 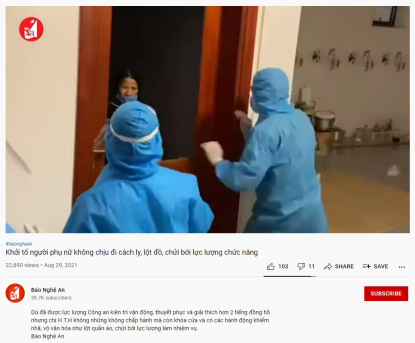 The video's Vietnamese-language description reads: "Although she was persistently mobilised, persuaded and told by the police force for more than 2 hours, Ms. HTH not only did not comply, but also locked the door and acted rudely, namely stripping off and cursing the force on duty".

Below is a screenshot comparison of the video in the misleading post (L) and Tuoi Tre's video (R): The same incident was reported by Radio Free Asia here on September 2, 2021 with a video credit for Báo Nghệ An.