Skip to main content
Members of the media visit the Nuclear Reactor inside the Bataan Nuclear Power Plant during a technical tour in Bataan in September 2016. ( AFP / NOEL CELIS)

A video has been viewed hundreds of thousands of times in multiple Facebook posts that show a Philippine senator claiming in a 2020 interview that all of the equipment in the country's mothballed nuclear power plant has been "sold" by previous governments. But the claim is misleading: the head of the agency tasked to maintain the facility told AFP the equipment has not been sold. A video report by Al Jazeera published in January 2021 showed the plant was not empty.

The text overlaid on the video states in part: "THE BATAAN NUCLEAR PLANT IS ALREADY EMPTY.."

The Bataan Nuclear Power Plant -- the first and only nuclear power plant in the Philippines -- was completed in the 1980s but never launched due to corruption issues and safety concerns.

"But past administrations sold the equipment, including the reactor, processor and other parts... It's an empty shell." 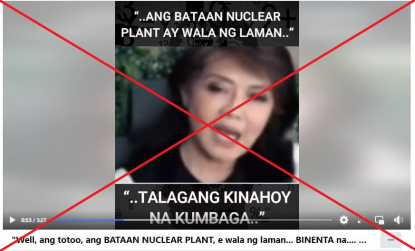 The post circulated online after President Rodrigo Duterte ordered in 2020 to create a body that will study the possibility of adopting nuclear energy in the Philippines.

Comments on the posts show users believed all the plant's equipment had been sold.

"They should investigate those who are in charge! Those who sold the equipment should be jailed," one commenter wrote.

"So shocking that IT'S EMPTY NOW," another user commented.

Keyword searches showed Marcos originally made the statement in an interview in 2020 here.

Below is a screenshot comparison of the video in the misleading posts (L) and its corresponding frame from the original video (R):

In response to the misleading posts, the head of the Philippine Nuclear Research Institute, the agency assigned to maintain the nuclear facility said it was "not true" that all the plant's equipment had been sold.

"It's not true. I was just there yesterday," PNRI Director Carlo Arcilla told AFP on September 15, 2021.

"Only the fuel was sold. [The] majority of the equipment is there. Naturally, some pieces suffered deterioration as time went by," he said.

Arcilla also denied the claim in 2020 in an interview here.

Keyword searches also found this video report by news channel Al Jazeera in 2021 that shows equipment inside the plant, including a nuclear reactor and a turbine generator.