A photo has been shared in multiple Facebook posts alongside a claim it shows Bollywood star Salman Khan paying tribute to late Bangladeshi actor Salman Shah. The claim is false. The image has been doctored to include the sketch of Shah; the original photo actually shows Khan holding a sketch of himself and his mother. 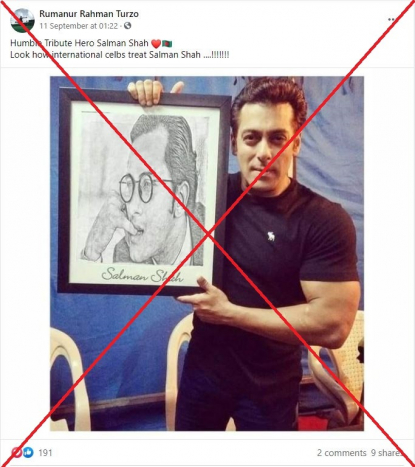 The same image was shared in similar Facebook posts here and here.

However, the claim is false. A picture of Shah has been digitally inserted into the original photo, which shows Khan holding a sketch of himself and his mother.

A reverse image search on Google found the original photo posted on Instagram on December 4, 2017 by Pameli Kayal, who describes herself as an artist and an architect.

Kayal thanked the Bollywood actor in the caption while tagging his official Instagram account. It reads, "Thank you @beingsalmankhan. New client : salman khan".

Kayal did not immediately respond to AFP when contacted on September 15.

However, on September 16, she posted the sketch again on her Instagram account along with a close-up of the illustration and two photos of her interaction with Salman Khan, with a caption "Original will always be original Past has no grudges future is only possibilities'' under the hashtag "#candidmemories".