Skip to main content
A woman cleans a radio during a consumer electronics trade fair in Berlin in 2014. ( AFP / TOBIAS SCHWARZ)

A claim that India's space research agency developed a streaming platform that allows users to tune in to any radio station in the world has been repeatedly shared on Facebook. But the claim is false. The streaming platform -- called "Radio Garden" -- was developed in the Netherlands. India's space research agency "was not involved in the development", a spokesman for the Dutch organisation that commissioned the project told AFP.

The claim was shared here on Facebook on September 9, 2021.

The Thai-language post translates to English as: "India is a capable country. From now on, you don't need to use a headset to listen to the radio. From now on, you can listen to any radio station around the world. It is developed by the Indian Space Research Organisation or ISRO.

"If you click on the below link you will see a spinning world. If you press the green spot, you can start listening to the radio station from that exact location, including local stations. How fascinating and convenient! Please share it."

The post links to a website called "Radio Garden" -- which as claimed allows users to tune in to radio stations across the world by clicking on a location on a map. 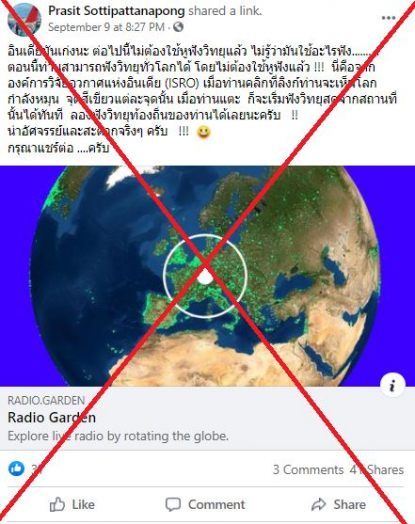 A similar claim was shared on Facebook in Thai here, here and here; in English here and in Tamil here.

"I can confirm ISRO was not involved in the development [of Radio Garden]", Bas Agterberg, spokesman for the Netherlands Institute for Sound and Vision, the Dutch organisation that commissioned the research for the platform, told AFP on September 15.

"One of the designers was Jonathan Puckey, started his own design studio before Radio Garden was launched," Agterberg said.

According to its website, "Radio Garden started out in 2016 as an exhibition project commissioned by the Netherlands Institute for Sound and Vision in the context of the research project Transnational Radio Encounters.

"After taking care of the project in the following years, Jonathan Puckey turned Radio Garden into a small independent company in 2019".

The website does not make any reference to the Indian Space Research Organisation. 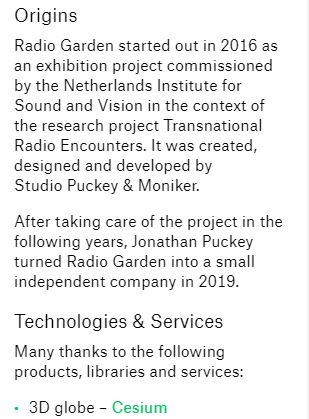 Further keyword searches on the ISRO website also found no mention that it developed Radio Garden, as the misleading posts claim.

AFP reached out to ISRO for comment but did not immediately hear back from the agency.