Skip to main content
People's Party of Canada leader Maxime Bernier speaks during a debate at the Canadian Museum of History in Gatineau, Quebec on October 10, 2019 ( POOL / Chris Wattie)

Social media posts feature a graphic showing the right-wing People's Party of Canada (PPC) polling ahead of major parties in the run-up to the Canadian federal election. This is false; despite a recent surge in popularity, the PPC has never reached 22 percent of voting intentions nationally, according to the polling company referenced in the graphic.

"PPCS RISING FAST , PASSING NDP AND LIBERALS. MORE PEOPLE PLEASE STAND UP AND VOTE PPC," says a September 10, 2021 Facebook post that includes the graphic on the alleged results of an EKOS poll. 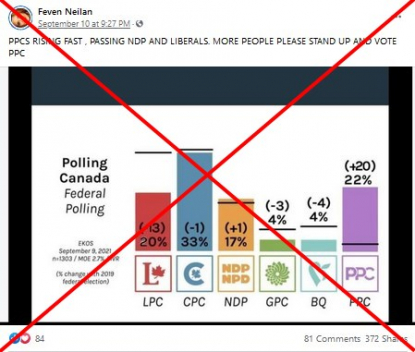 The claim also appeared on Facebook here and here.

But Jeff Smith, project leader with EKOS Research Associates, said the graphic does not accurately portray data from the company.

"The Facebook post says the PPC is polling at 22 points nationally when, in fact, we have never seen them above 11.7 percent at the national level," he told AFP on September 13.

"This 22 percent figure does not appear in our September 7-9 poll," he said, while noting that the sample size and approximate date quoted in the chart correspond to a September 10 press release that can be found on EKOS website. 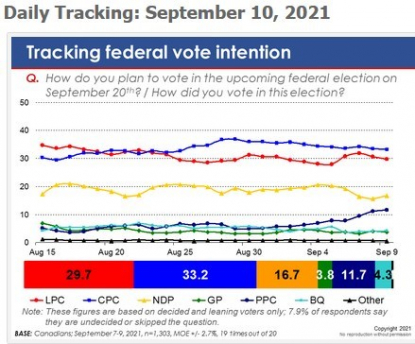 Screenshot taken on September 14, 2021 shows data on the ekospolitics.com website

The PPC was polling below 10 percent in subsequent days.

Smith said the polling firm does sometimes note regional spikes for the PPC. In Alberta, for example, the PPC polled at 21 percent in results released on September 10, but the small sample size in the region might explain this.

"We had only 125 cases from Alberta, yielding a margin of error of 8.8 percentage points. In regions where sample sizes are small, it is not uncommon to see dramatic shifts in party support (which is why we don't report on the results from Manitoba and Saskatchewan). Indeed, support for the PPC in Alberta declined to just 8 points two days later," he said.

EKOS Research founder Frank Graves also commented on the purported poll results on Twitter, replying to a now-deleted tweet saying the chart is "patently false" and "a crude piece of disinformation."

The PPC, which was credited with 1.6 percent of the vote in the 2019 federal election and had no seat in the House of Commons, experienced a recent surge in the polls, fueled in part by anger and discontentment over lockdowns and other public health measures aimed at curbing the spread of Covid-19, which are opposed by party leader Maxime Bernier.

Following a failed bid for the Conservative leadership, the former cabinet minister left the party and created his own in 2018, advocating for a smaller government, drastic restrictions on immigration, and the withdrawal from the Paris Climate Accords.

The populist leader has appeared in various events opposing measures aimed at countering the Covid-19 pandemic, and was arrested at a rally in Manitoba for violating the province's public health orders.