Skip to main content
A view of the Internal Revenue Service building is seen on March 27, 2019 in Washington, DC ( AFP / Brendan Smialowski)

US income tax was not 'temporary' measure to fund war

Social media posts claim the US federal income tax was implemented as a temporary measure to fund World War I and that the government could subsist with a sales tax on "nonessential" items if the Federal Reserve was eliminated. But the claims related to the war and taxes are false, the Federal Reserve has no role in such policy, and experts highlighted significant problems with the idea of funding the budget via a sales tax.

"IF WE ENDED THE FEDERAL RESERVE WE WOULDN'T NEED AN INCOME TAX. IMAGINE THAT. YOU'D STILL RECEIVE YOUR SAME SALARY, BUT THE ONLY TAX WOULD BE SALES TAX ON NON-ESSENTIAL ITEMS YOU BUY," the post says. 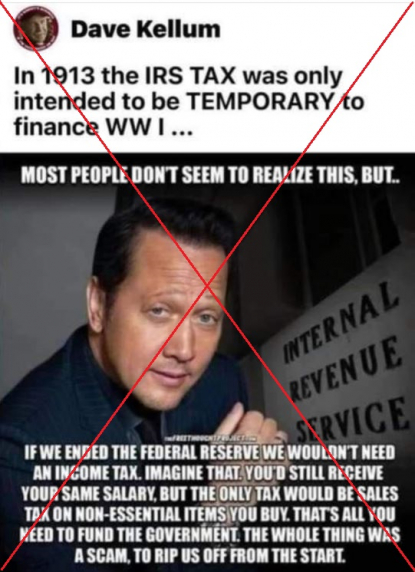 But the federal income tax was unrelated to World War I, which began in 1914, with the United States not entering the conflict until 1917, after attempting to remain neutral.

The first US income tax was enacted in 1861 to fund the Civil War and then repealed a decade later. A national income tax approved by Congress in 1894 was subsequently ruled unconstitutional by the US Supreme Court.

This led to movement for a constitutional amendment, which was passed by Congress in 1909 and ratified by the requisite 36 states between August 1909 and February 1913. Taxes were collected by a federal agency that came to be known as the Internal Revenue Service (IRS).

After the 1894 Supreme Court decision, "there was an immediate backlash against that decision that consisted of social movements mainly in the South and Midwest," Ajay Mehrotra, a Northwestern University Pritzker School of Law professor who has authored several books on US tax history, told AFP.

"Although it took these social movements almost two decades to ratify a constitutional amendment overturning the SCOTUS decision, the mere fact that the movement began in the 1890s... convincingly demonstrates that the progressive income tax (effort) predated the war (World War I)."

The social media posts also misinterpret the role of the Federal Reserve, the US central bank which was coincidentally created in 1913. Congress established the Fed to help alleviate financial instability following a series of panics and crises in prior years, with a mission to stabilize prices and maximize employment.

Contrary to the claims in the post, the Fed has no role in tax policy, which is determined by Congress and administered by the Treasury and the IRS.

The overall budget for the Federal Reserve System, including its regional banks, was $5.2 billion in 2020, with some of the costs offset by its earnings from lending operations. The fiscal year 2021 federal budget calls for outlays of $6.8 trillion, according to the Congressional Budget Office with revenues of $3.8 trillion and a record $3.0 trillion deficit.

The claim that a sales tax on nonessential items could fund the government is "clearly ludicrous," according to Daniel Shaviro, the Wayne Perry professor of taxation at New York University and a former legislation attorney at the Joint Congressional Committee on Taxation.

"While it's impossible to forecast how this hypothetical tax would work, once they had exempted what were deemed to be essential items, along with all the other sorts of things (e.g., various kinds of services) that existing sales taxes typically miss, we'd likely be talking about a sales tax rate in the neighborhood of 100 percent," Shaviro said.

"I would also anticipate massive fraud and evasion issues, plus a need to address the problem of buying an item as a business input rather than as a consumption item," he added.

Steve Rosenthal, a senior fellow at the Urban-Brookings Tax Policy Center and a former legislative counsel at the Joint Committee on Taxation, said the notion of replacing the income tax with a sales or consumption tax has been debated for decades.

But these proposals have failed to gain traction, in part because "you can't shift from one system to another other without major dislocations and entirely different sets of winners and losers."

One proposal circulated in the late 1990s known as the FairTax called for a 23 percent national sales tax -- effectively adding 30 percent to purchase prices -- drew criticism for a radical change in how the tax burden is distributed.

A Brookings Institution analysis found that this system would raise taxes on 90 percent of Americans with the top 10 percent getting a tax break.

Rosenthal said there is no consensus on what constitutes "nonessential" items, and that any tax system based on this could trigger controversy over which items to exempt.

"I don't know how many items you could take out of  the tax base and still have enough revenue," Rosenthal said. "If you only tax nonessential things people have the discretion to stop consuming  those things and you get less revenue, so you would need a higher rate."