Old photo resurfaces in misleading posts about flooding in Thailand

The Thai-language caption to the image reads: "In Bangkok, Thonburi side (Bangkae), many people criticised the gardener for cutting the grass in a boat shape.

"Today this image says it all, floods reached the boat level. Many people took a photo of this scene."

The image appears to show plants on a flooded road that had been trimmed in the shape of a boat. 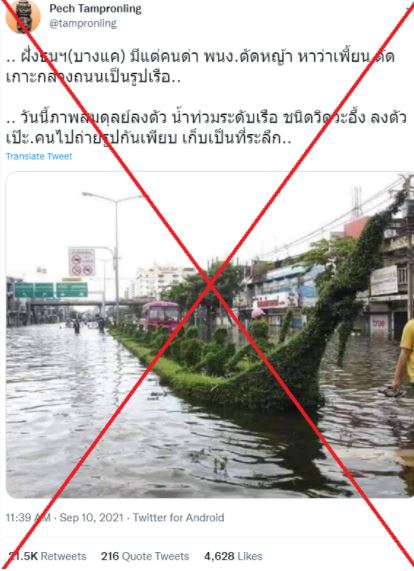 The post circulated online as monsoon rains caused flooding in several provinces in Thailand in September 2021, according to this report.

Comments on the post indicate people were misled and believed the image shows recent flooding in the country.

One user said: "I haven’t passed over there for a while, it’s beautiful".

Another wrote: "Just Covid-19 I barely have anything left, then there is flooding I would die."

However, the image has been shared in a misleading context. It has circulated online since 2011.

A reverse image search on Google found the same image published in an article on Thai lifestyle website Kapook on November 9, 2011.

Below is a screenshot comparison of the image in the misleading posts (L) and the image on Kapook’s website (R):

The same image has been shared on various Thai websites in 2011, including here and here.

In October 2011, the Thai capital Bangkok and 20 other provinces were affected by flooding that forced authorities to a "crisis mode", AFP reported.

Using visual clues in the photo, AFP was able to geo-locate where the image was taken in Bang Phlat district in western Bangkok.

The boat-shape plants are visible on Google Street View below.