The post claims it shows the aftermath of a boating accident in the eastern district of Brahmanbaria. 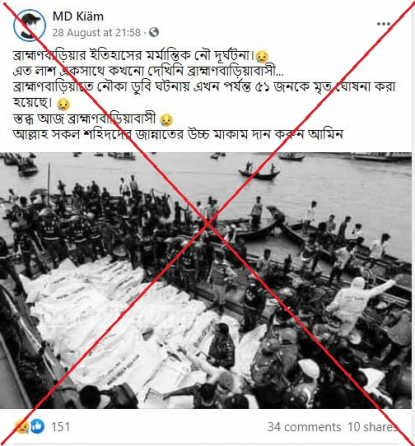 The post's Bengali-language caption translates to English as: ‘‘The most poignant boat accident in Brahmanbaria’s history.

"The people of Brahmanbaria never experienced such deaths together. Until now 51 are announced dead in the incident.

"The people of Brahmanbaria are stunned in grief. May Allah grant them the highest place in heaven".

More than 20 people died after a boat packed with passengers and a sand-laden cargo ship collided in Brahmanbaria on August 27, 2021, AFP reported.

The image was also shared here and here on Facebook with a similar claim.

A reverse image search on Google found a colour version of the photo published in this on Bangladeshi online news portal Bdnews24.com.

The photo was taken by Bdnews24 photographer Mahmud Zaman Ovi on June 29, 2020.

It was captioned: "Bodies recovered by rescuers are lined up after a launch sank on the Buriganga River near Dhaka's Shyambazar following a collision with another vessel on Monday".

At least 32 people died in the ferry accident in the Bangladeshi capital Dhaka, AFP reported on June 29, 2020.

Below is a screenshot comparison of the image in the misleading post (L) and the photo in Bdnews24's report (R):