These photos show trains in China and Turkey, not Laos

Four photos of modern train carriages have been shared thousands of times in Thai-language Facebook posts that claim they show a new high-speed railway line linking Laos and China. The posts go on to criticise Thailand for allegedly building trains made of "Japanese scrap metal". The images have been shared in a false context: the photos actually show trains on domestic railway lines in China and Turkey.

"Route runs from Vientiane to Kunming in Yunnan Province, China, which has been completed and service ready by December 2021. The fares are only 480 baht (US$15).

"Thailand will have to wait and use the diesel-fueled rail services, Japanese scrap metal from 1981".

The post shared four photos of modern train carriages, including one with reclinable seats. 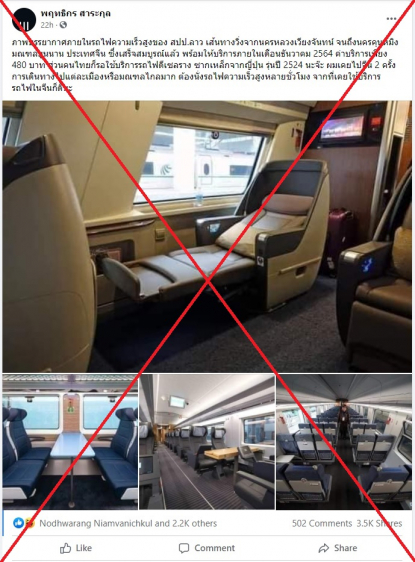 The post emerged online shortly after Thailand's state railway authority announced plans to import 17 second-hand diesel trains from Japan which will be renovated for service in the kingdom, according to local media reports.

The same photos were shared alongside a similar claim in Facebook posts here, here and here.

The photos, however, have been shared in a false context.

A railway line linking Laos to the Chinese border is scheduled to open on December 2, 2021, the Bangkok Post reported.

However, it is not a high-speed railway, as the Facebook posts claim.

The track -- which is set to cover 420 kilometres -- will operate at a maximum speed of 160 kilometres per hour, the Bangkok Post reported.

Rail services are classed as "high speed" if they run at 200 kilometres per hour, according to the International Union of Railways.

China's State Council Information Office also states that the minimum speed of a high-speed rail structure is 200 kilometers per hour.

The first photo featured in the posts shows a train that runs between Beijing and Shanghai.

Reverse image searches and keyword searches found the photo in this article on travel blog The Man in Seat Sixty-One.

It claims it shows the business-class area of a "Fuxing" train that travels from Beijing to Shanghai.

"The seats recline electrically and can become flat at the touch of a button," it reads. "Each seat has a power socket. Business-class is expensive even by western standards, but if you can stretch that far it's well worth it. The fare includes one hot tray meal and a constant stream of tea, coffee, apple juice, orange juice, or soft drinks. There's a VIP lounge for business class passengers at Beijing South & Shanghai Hongqiao".

A reverse image search on Google found the second photo in the misleading post published in this article from June 2021 about Chinese-made trains exported to Europe.

China Daily, a Chinese state-run media publication, reported the double-decker bullet trains were set to be exported to Austria.

A reverse image search on Google found the third photo was published in this article about railways in Turkey.

The article by Siemens Mobility is titled "Full speed ahead into the future".

It features several images of high-speed trains set to be developed by the Turkish State Railway (TCDD).

A reverse image search on Google found the fourth photo was shared in this tweet about a train in Shanghai.

"The CR200J train, with a centralised power system that runs 160-km-per-hour, will be put into use before the Spring Festival travel rush in 2019".