Skip to main content
A resident prepares to register herself for receiving a dose of the Covid-19 coronavirus during a mobile vaccination drive by army health officials in Colombo on August 12, 2021 ( AFP / Ishara S. KODIKARA)

Facebook posts shared hundreds of times claim a Sri Lankan army officer wrote to President Gotabaya Rajapaksa alleging corruption at a Covid-19 vaccination drive at a military hospital. The posts purport to show an article reporting the news. However, the claim is false; the article is a fabrication, while the army said the story was "baseless".

"Vaccination programme at Narahenpita Army Hospital is corrupt, an army officer writes to the president," reads the Sinhala-language text on a screenshot posted to Facebook on September 8.

The screenshot features a photo of Sri Lankan journalist Chathura Alwis, who hosts 'Aruna', a morning TV show where he discusses the day's headlines.

The Facebook post has been shared more than 800 times, while similar posts were published here and here. 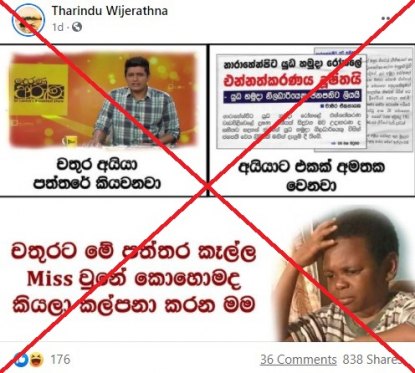 In July, Sri Lanka drafted in the armed forces to help speed up its Covid-19 vaccination drive. The army set up a series of community vaccination centres including the Narahenpita Army Hospital in the capital Colombo.

Some social media users appeared to believe the screenshot showed a genuine newspaper article and that it was deliberately omitted from Alwis' show.

"He is only used to reading what he prefers, never reads what he doesn't like," one person commented on Facebook.

"Extremely wrong use of media," another wrote.

However, the claim is false. The newspaper article is a fabrication and the army said the story was "baseless and false".

Keyword searches on Google in both English and Sinhala did not yield any results that led to reports of an army officer writing to the president about alleged corruption at Narahenpita Army Hospital's Covid-19 vaccine drive.

A closer look at the newspaper screenshot shared in social media posts did not reveal design similarities to any Sinhala newspapers, except a minor likeness to Aruna newspaper.

Coincidentally, the newspaper has the same owner as the TV channel that broadcasts Chathura Alwis' show of the same name.

The blue bullet point before the reporter's name, which is given as Chamara Ekanayake in the fake article, is unique to the layout of Aruna newspaper.

Below is a screenshot comparison of the doctored newspaper article (left) and a genuine Aruna article (right). 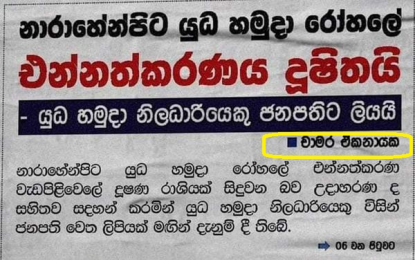 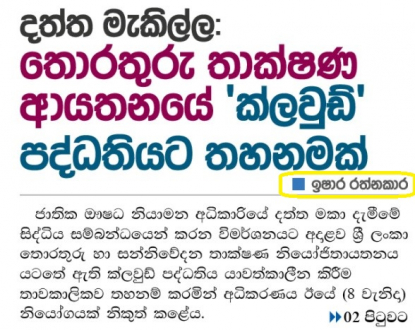 However, Aruna said it had not published such an article and did not employ a journalist called Chamara Ekanayake.

"This may seem similar to Aruna's layout design, but if you closely observe it shows there are stark differences; the font and layout is different and so is the arrow design we insert for continuations inside," a spokesperson told AFP.

"We also do not have a reporter named Chathura Ekanayake".

Meanwhile, the Sri Lankan army said the story was inaccurate.

"These claims from social media were brought to our attention. No such letter has been written to the president. These claims are baseless and false," a spokesperson told AFP.