An image has been shared hundreds of times in Facebook posts that claim it shows a Philippine navy ship hoisting a banner urging Philippine Vice President Leni Robredo to take over control of the country. But the image has been digitally altered: the original photo does not show the purported banner.

It purports to show a navy vessel with a banner that reads: "LET LENI LEAD". 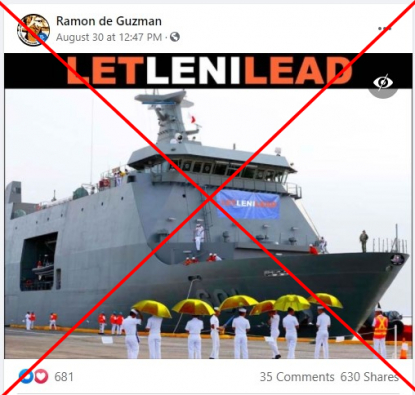 The hashtag "#LetLeniLead" has been used by supporters of Philippine Vice President Leni Robredo since 2020 to urge her to take over control of the country.

President Rodrigo Duterte has faced criticism over perceived inaction on issues including the coronavirus pandemic.

The image circulated online as local media reported that several groups across the country held online conventions to urge Robredo to run for president in 2022.

The same image was also shared here, here and here on Facebook.

Comments on the posts indicated some social media users thought the image was genuine.

"The [Armed Forces of the Philippines] should be apolitical," wrote another.

A reverse image search on TinEye found the original photograph was taken by the Associated Press news agency on May 16, 2016.

The photo's caption reads in part: "Navy personnel acting as ushers, carry umbrellas to escort guests as BRP Tarlac, the first ever SSV (Strategic Sealift Vessel) of the Philippine Navy, is docked upon arrival following a two-week voyage from Indonesia Monday, May 16, 2016 at the South Harbor in Manila, Philippines."

The photo had been digitally altered to insert the pro-Robredo banner. It was also manipulated to add a small image of President Duterte and alter the colour of the umbrellas from blue to yellow.

Yellow is a colour associated with Robredo's political party.

Below is a screenshot comparison of the altered image (L) and the AP photo (R) with the doctored elements circled: 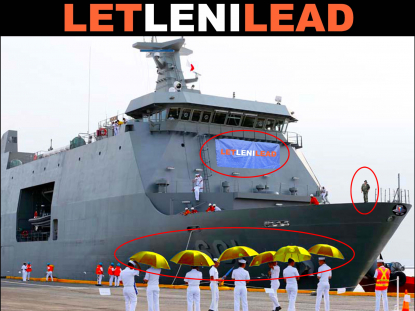 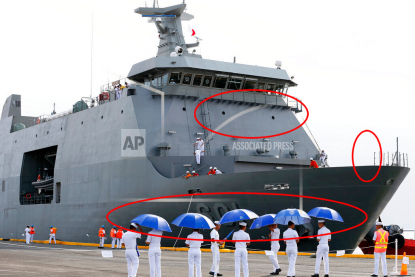 The earliest example of the hashtag "LetLeniLead" AFP could find on CrowdTangle and Twitter was late January 2020.

This is more than four years after the original AP photo was published.

Further keyword searches did not find credible reports that the Philippine navy hoisted a banner in support of Robredo.