A video of people celebrating a Hindu festival in Indian-controlled Kashmir has circulated in social media posts and reports that claim the Muslim-majority region marked the event for the first time in decades in August 2021. The claim is false: people living in the region have regularly celebrated the annual festival since at least 2004, according to news reports.

The post refers to Janmashtami, an annual Hindu festival celebrating the birth of Krishna, one of the most popular Indian deities. In 2021, it was celebrated on August 31.

"After 32 Years Janmashtami Was Celebrated In Kashmir," the post reads. 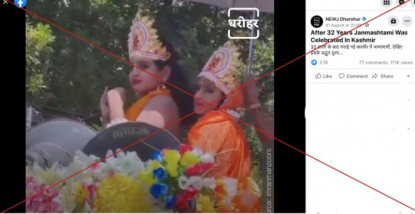 Screenshot of the false claim shared on Facebook, taken on September 9, 2021

It was also shared with a similar claim in news reports published by Indian media sites News18, Zee News and Sudarshan News.

News reports and photos show people in Indian-controlled Kashmir have regularly celebrated Janmashtami since at least 2004.

An AFP photographer captured this image of a girl posing as Hindu god Lord Krishna at a celebration of the festival in Srinagar in 2004: 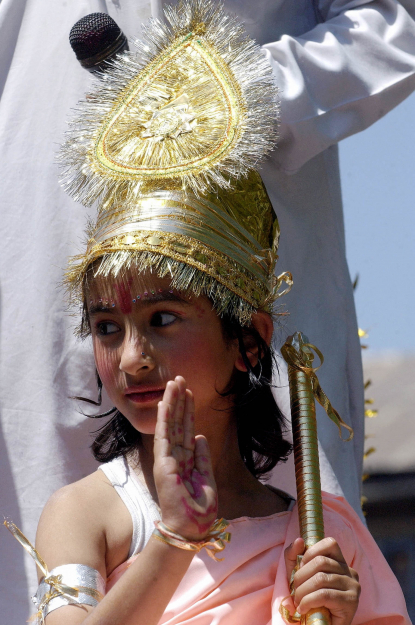 A girl, posing as Hindu God Lord Krishna, sits on top of a vehicle during a procession to mark Janmashtami in Srinagar on September 7, 2004. ( AFP / MUSTAFA TAUSEEF)

Photos of the Janmashthami procession in the city of Srinagar were published in reports in 2007; 2012; and 2013.

In 2019, celebrations were cancelled after the Indian government stripped Indian-administered Kashmir of its special status and enforced a curfew.

Celebrations were also cancelled in 2020 due to the Covid-19 pandemic, according to local reports.

"During the past two years, the procession could not be held due to curfew restrictions after the abrogation of the special status of Jammu and Kashmir followed by the COVID pandemic", Free Press Kashmir reported.

Sanjay Tickoo, a member of the Kashmiri Pandit Sangharsh Samiti, a Hindu organisation based in Srinagar, told AFP: "Hindus have been taking out the Janmashtami procession for a long time.

"In 2019, it couldn’t be held due to the removal of the special status of Kashmir followed by a strict lockdown, and in 2020, it wasn’t held due to the Covid-19 pandemic".

The video in the misleading posts was originally shared on Twitter by local journalist Imran Shah on August 30, 2021.

Janmashtami was seen celebrating in Lalchowk Srinagar , People of Kashmiri Pandit community took out procession of Lord Krishna. An example of Hindu-Muslim unity has been seen on the streets of Srinagar. #Janmashtami#kashmirpic.twitter.com/anqvFEUnkC