A photo that shows a pool of blood on a street has been shared in multiple Facebook posts that claim it was taken after Indian farmers were attacked by police during a protest in north India in August 2021. The image, however, has been shared in a misleading context. The original photo was in fact taken after an Indian paramilitary soldier was killed in a militant attack in Kashmir in 2013.

The post’s Hindi caption reads: “It's very sad that the blood of farmers is on the street. Before coming to power, they used to make numerous claims about farmer benefits, now when in power, you can see what is happening.” 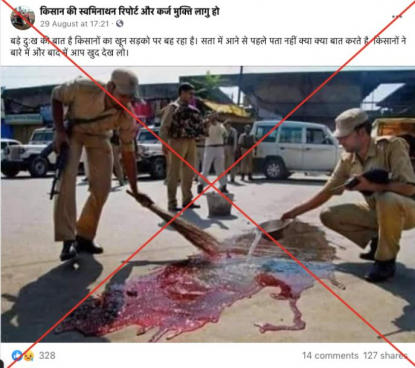 The image began to circulate online a day after farmers clashed with police in the northern Indian state of Haryana protesting over farm laws, Indian news outlet The Quint reported.

According to this report by Indian news agency Press Trust of India (PTI), some of the farmers were left with bloody wounds.

A reverse image search found the original photo from PTI published here on The Indian Express news website about an Indian paramilitary soldier being killed in Kashmir in 2013. The story is titled “CISF jawan killed in militant attack in Srinagar.”

The Central Industrial Security Force (CISF) is a paramilitary force in India.

Srinagar is the summer capital of Indian administered Kashmir.

Below is a screenshot comparison of the photo in the misleading post (L) and the Indian Express photo (R):

The original photo was also published here in the PTI website's archives on the same day. 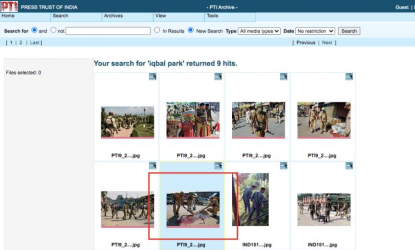 Screenshot of the photo published in PTI archives