Canada's Conservative party leader Erin O'Toole suggested Prime Minister Justin Trudeau plans to create a tax on the sale of principal residences, citing the Liberal party's platform. But the proposed policy, which has also been the subject of inaccurate social media posts, is an "anti-flipping" tax aimed at preventing speculators from profiting off a red-hot housing market.

"Mr Trudeau, Canadians are worried you're going to be taxing their primary home sale... it's on page 14 of his policy book," O'Toole said during a September 9, 2021 federal election debate.

"That is untrue," Trudeau replied -- a denial that was echoed on Twitter by other Liberal politicians seeking re-election.

O'Toole's remarks echoed claims made in social media posts that have been shared tens of thousands of times during the election campaign.

"If you sell your principal residence (your home) today it is a tax free transaction. That is about to end. Our current Government is proposing to eliminate this tax shelter," says text in an image featured in a September 2 Facebook post. 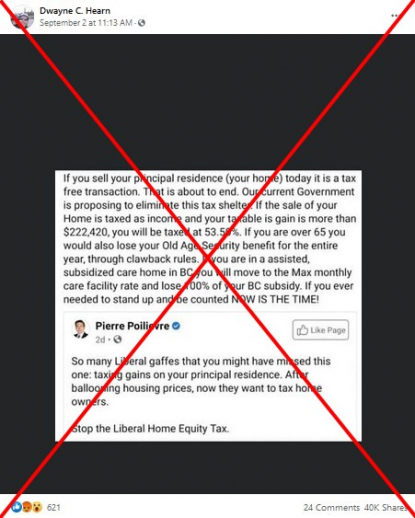 Other examples of the same claim, which include an August 25 tweet by Conservative MP Pierre Poilievre, can be found here, here, here and here.

But the Liberal party platform does not contain a proposal to add capital gains taxes to the sale of a principle residence, and Trudeau has repeatedly said it is not the policy of his government.

Asked about it at a press conference on September 7, Trudeau said: "We will not do that. That is something we are not interested in doing."

Trudeau explained that his party would establish a measure against "house flipping" by imposing a tax on the resale of homes within 12 months, unless the seller experienced a significant change in life circumstances such as a divorce.

This measure can be found on page 14 of the Liberal party's platform, available on its website. 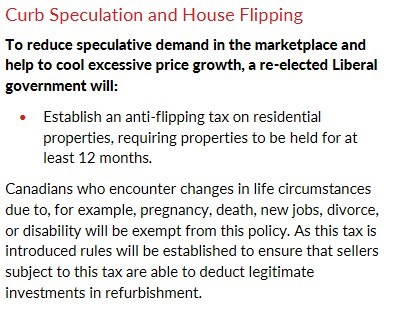 Screenshot taken on September 8, 2021 shows page 14 of the Liberal platform

The platform makes no mention of a general home equity tax on principal residences.

Brook Simpson, a spokesman for the Liberal party, told AFP in a phone interview that "it's not part of our plan."

He emphasized that the anti-flipping tax "is not a big revenue raiser, it's more of a deterrent from a regulatory perspective... It's trying to target a very narrow group of people and a specific practice."

Screenshot taken on September 8, 2021 shows page 77 of the Liberal platform

The Canada Revenue Agency states on its website that "when you sell your home or when you are considered to have sold it, usually you do not have to pay tax on any gain from the sale because of the principal residence exemption."

"That would still be the case," according to Simpson, "except in the case where somebody were to do that inside of 12 months, but with the caveats for extenuating circumstances."

The social media post also claim: "If you are over 65 you would also lose your Old Age Security benefit for the entire year, through clawback rules. If you are in an assisted, subsidized care home in BC you will move to the Max monthly care facility rate and lose 100% of your BC subsidy."

Simpson said that the claim that people over 65 would lose their Old Age Security benefit for a year is also false: "We are not making any changes to the system."

The Canada Revenue Agency said in an email that "there are generally no tax implications when an individual sells their principal residence in Canada because of the principal residence exemption, and therefore no impacts on Old Age Security entitlements."

Contacted by AFP, the British Columbia government declined to comment.

This is not the first time that disinformation about a home equity tax has targeted Trudeau's party.

In July 2020, then minister of Families, Children and Social Development Ahmed Hussen, who is now seeking re-election, denied claims that the Canadian government was considering charging capital gains on primary residences.