A photo has been repeatedly shared in South Korean Facebook posts alongside a claim that it shows a truck blocking a road while displaying an anti-government message. But the photo has been doctored to digitally insert the message onto a stock image of a truck.

The photo was shared on September 2 in a Facebook group that appears to be critical of the South Korean government.

It shows a truck that displays a Korean-language sign which reads: "We will continue blocking [the road] until the government resigns." 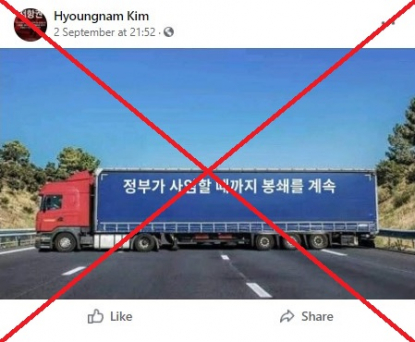 An identical photo was also shared on Facebook by the same user here, here, here and here.

Comments on these posts indicate social media users believed the photo was genuine.

"I support them," one wrote.

"I wish I had money to buy a truck to do the same," wrote another.

A reverse search on Google found the original image was previously published on stock photography websites Shutterstock and Dreamstime.

On both websites, the image is captioned: "Road closed by big truck standing across. Road accident concept."

The stock image has been digitally altered to insert the Korean-language anti-government message.

Below is the screenshot comparison between the altered photo in the misleading posts (L) and the original image (R).

Similar doctored photos showing the truck but with an anti-Australian government message have been debunked by Reuters.