An image that purports to show former South Korean president Roh Moo-hyun making a gesture resembling a heart at a summit with then North Korean leader Kim Jong Il has been shared repeatedly in multiple social media posts. The image, however, has been doctored. A photo of Roh making the gesture at an unrelated event in 2003 has been inserted into a screenshot of a scene from a 2007 summit, during which Roh did not make any such gesture.

The image was shared here on Facebook on September 7, 2021.

Its Korean-language caption states: "'This is how you beg for love.' Not with money but with a hand gesture." 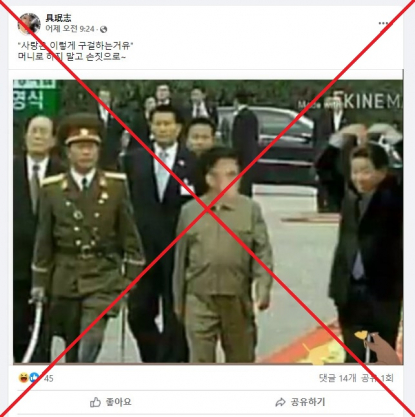 The image appears to show Roh on the right, making a heart-shaped gesture with his arms, and Kim on the left looking at him.

A higher resolution version of the same image was shared here on Facebook and includes a caption on the bottom that reads, "The two leaders salute a ceremonial guard".

A news caption on the top left of the image reads, "2007 inter-Korean summit, official welcoming ceremony".

Comments on the posts indicate several users believed the image was genuine.

One user wrote: "His body is so rigid that his arms barely make it up. Why? Is he doing this. Roh and Moon are a crazy duo."

"Look at the kinds of things these inferiors do~~," wrote another.

Through a Google reverse image search, AFP was able to find a screenshot of a YTN news broadcast of the 2007 summit resembling the image shared on Facebook, published by South Korean news company Newsis on October 2, 2007.

The caption reads: "On the day of the inter-Korean summit on the 2nd, President Roh Moo-hyun and his wife arrive at a welcoming ceremony at Pyongyang's 425 Cultural Palace greeting grounds and are received by North Korea's Central Defence Committee Chairman Kim Jong Il."

A video of the entire welcoming ceremony can be seen in this news clip published by South Korean broadcaster SBS on YouTube. In the video, Roh does not make any heart-shaped gesture with his arms.

Below is a screenshot comparison of the doctored image shared on Facebook (L) and a screen capture of a corresponding scene from the SBS news clip (R).

Another news clip from the same event was published on YouTube here by Hankyoreh, a South Korean news company.

Keyword searches on Google traced the photo of Roh making the heart-shaped gesture to a photograph published by South Korean news agency Yonhap on May 18, 2003, years before the 2007 inter-Korean summit. 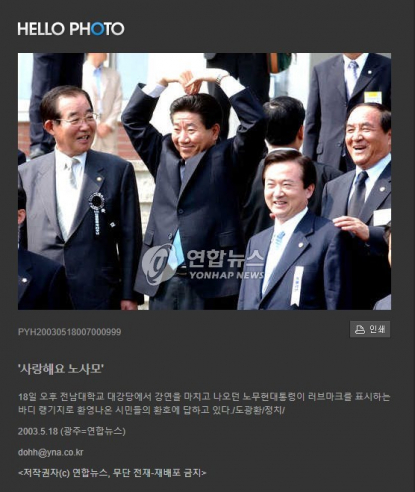 Screenshot of the Yonhap photograph published in May 2003, captured September 8, 2021

The photo's caption reads in Korean: "President Roh Moo-hyun, following the delivery of a lecture at an assembly hall at Chonnam University on the afternoon of the 18th, responds to public fanfare using body language that symbolizes love."