This photo of 'Kratom juice in Thailand' has been doctored

After Thailand decriminalised the use of Kratom, a Southeast-Asian leaf used to treat various ailments, an image was shared in multiple Facebook posts that purportedly shows a can of Kratom juice available to buy in shops. The image, however, has been doctored: the original picture shows a white gourd drink manufactured by a Taiwanese company.

"Kratom juice, it is now available at 7-11," reads the Thai-language caption of this Facebook post, published on August 27, 2021.

The photo appears to show a green and white can with a picture of a green leaf on it.

The Thai text above the leaf reads: "Kratom Juice". Kratom has been used for centuries in Southeast Asia and Papua New Guinea for its pain-relieving and mildly stimulating effects, although some health regulators around the world have criticised it as potentially unsafe, as AFP has reported.

It was categorised in Thailand as a harmful narcotic under the 1979 Drug Act until August 24 this year, when it was decriminalised.

The photo of the purported juice drink was shared in Facebook posts here, here and here alongside a similar claim.

Comments on the posts indicated some users were misled by the image, with one user asking: "How much is it?"

Another user wrote: "I would like to try it".

A reverse image search found this image on the Thai public forum Pantip.com.

It was published on March 11, 2015 -- almost six years before Thailand legalised Kratom. English text on the can reads "Taisun" and "white gourd drink". The same text is visible on the doctored image.

Below is a screenshot comparison of the image in the misleading post (L) and the image from the online forum (R): 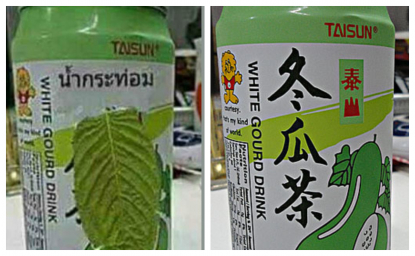 A further keyword search found the drink -- which is manufactured by Taiwanese food company Taisun -- is sold in multiple online shops in Thailand, including here, here and here.

AFP conducted a search on 7-11 Thailand's website and found no results related to "Kratom juice" or anything similar.