As Malaysia's Health Ministry introduced a new "check out" function on its official contact tracing app in September 2021, multiple social media posts claim that people who do not check out on the app when they leave any location or premise will be fined 1,500 ringgit ($361). However, the claim is false; the Malaysian Ministry of Health denies the existence of the purported fine.

The claim was posted on Facebook here on September 3, 2021, and it has been shared more than 120 times.

The Chinese-language text superimposed on the image reads: “Be careful: Everyone should scan when entering a store from September 5

"Latest news! MySejahtera will launch a new function where people will not only have to scan the QR code before entering a store, but also have to click Check-Out when they leave in order to easily track the contact!

"Should Check out when leaving too
RM 1.500 fine if you don't Check out 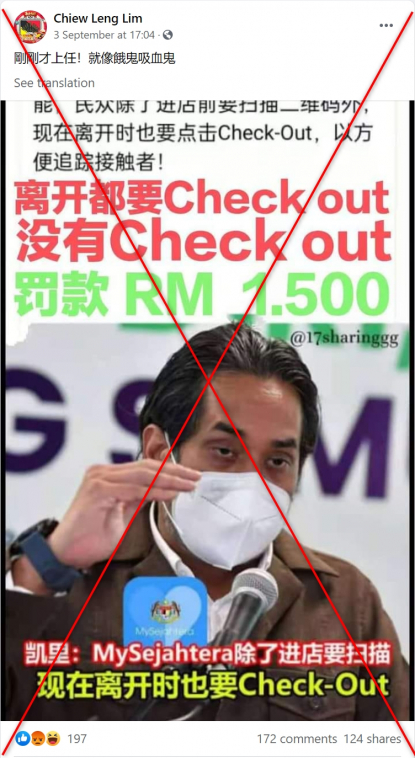 Screenshot of the other misleading post, taken on September 8, 2021

MySejahtera is the Malaysian government's official application with functions that include tracing close contacts of Covid-19 infections, showing results of the user's Covid-19 tests and keeping their vaccination records.

The Malaysian Ministry of Health denies the claim about the fine in this Facebook post on September 3, 2021.

The post's caption states: “The viral graphics in this Whatsapp is not true. There is no fine of RM1500 if you do not 'check out' in MySejahtera as stated in the graphic.”

The Malaysian Ministry of Communications and Multimedia also tweeted KKM's denial on September 4, 2021.

A reverse image search found Khairy's photo was published by national news agency Bernama on August 7, 2021, when he was still the coordinating minister for the National Covid-19 Immunisation Programme.

Khairy was sworn in as Malaysia's health minister on August 30, 2021.

Below is a screenshot comparison of the image in the misleading post (L) and the Bernama photo (R):