This photo shows an assault in India on Dalit men, not Muslims

A photo of four men tied up with ropes has been shared multiple times in Facebook posts that claim the men are Muslim. The claim is false: the photo has circulated online since 2016 in news reports about an attack on four Dalit youths by "cow vigilantes" in India's Gujarat state.

"This is the condition of our Muslim brothers in India, oh Allah, you keep them safe," reads a Bengali-language Facebook post from August 29, 2021. Activists say attacks against Muslims -- many of them unprovoked -- have been on the rise since the party came to power in 2014.

The image has been shared in multiple other posts alongside a similar claim including here and here; and as far back as July 2019.

A Google reverse image search found several news reports about a Dalit family who were beaten by "cow vigilantes" in Gujarat state in July 2016.

This term refers to Hindu extremists who attack people accused of eating beef or killing cows, which are sacred to many Hindus.

Dalits are the lowest caste in Indian Hinduism’s hereditary social hierarchy. They are considered "untouchable" and have long faced discrimination and abuse.

An identical photo to the one in the misleading posts can be seen in this Muslim Mirror article published on July 25, 2016.

The title reads: "Una assault lifts lid on atrocities on Dalits in Gujarat." 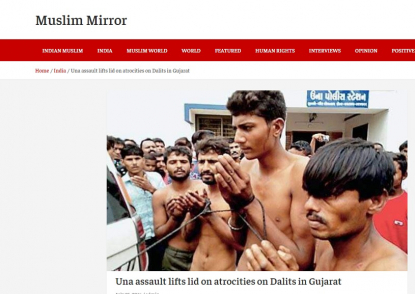 AFP could not find the exact source of the photo, but corroborating news reports, such as this from India Times on July 13, 2016, contain a similar image of the same four men.

A report from Indian news outlet Scroll credited that photo to Twitter.

The articles report on the arrest of three cow vigilantes for assaulting the men in Una, a municipality in the Gir Somnath district of Gujarat.

The Gujarati-language signboard behind the four men in both the pictures reads "Una Police Station". 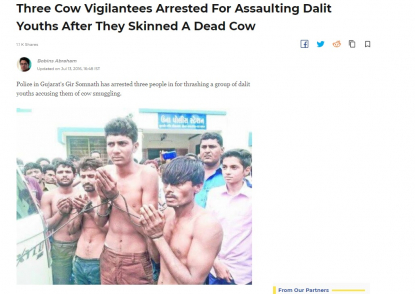 Below is a comparison of the image in the misleading posts (L) and the image from the Muslim Mirror article (R).

The incident was widely reported at the time, including by The Times of India, and the Indian Express.

Reports from various outlets all name the Dalit family as the Sarvaiyas. They say the four men were tied to an SUV and flogged by the vigilantes after they were accused of killing a cow.

A video clip of the incident from a different angle was uploaded on the Indian Express' YouTube channel on July 13, 2016 after it went viral on social media.

Although Indian broadcaster NDTV reported that one of the attackers had allegedly tried to incite the crowd by claiming one of the victims was Muslim, all reports on the incident describe the family as Dalit.

The image used in the misleading posts has in fact been used as a banner protesting against discrimination against Dalits, according to this tweet by an independent journalist who lists himself as based Delhi.