A photo has been shared in multiple Facebook posts that claim it shows former Sri Lankan police official Ajith Rohana reunited with his children after he was hospitalised with Covid-19. The posts are misleading; the picture shows Rohana with a local musician and his wife before his ordeal with Covid-19.

The joy of children when a father returns... / May the triple gems bless Ajith Rohana," reads a Sinhala-language Facebook post from August 29.

The photo shows former Sri Lankan police spokesman Ajith Rohana smiling as he poses with his arms around a man and a woman. 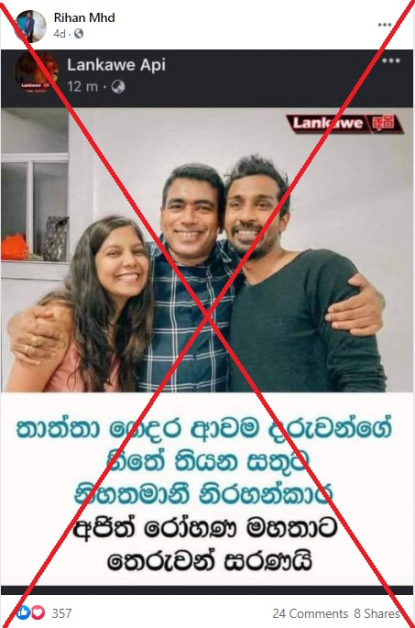 The photo was also shared in similar Facebook posts here and here after Rohana was discharged from a hospital in Colombo where he had been treated for Covid-19, local media reported.

"Happy to see you with your children," a social media user commented in one of the posts.

"Senior DIG Ajith Rohana is an old friend of my father (both are from the legal field and are therefore friends professionally as well) and is a close friend of my wife's family as well."

Shehan told AFP the photo was taken at Rohana's birthday party "about a year ago".

Rohana also said the photo had been misrepresented on social media.

"These are not my children. This is a friend's son and his wife," he told AFP.

Further keyword searches found a photo of Rohana and his family published by Dharanee magazine here on Facebook in February.