Skip to main content
A medical staff member wearing protective gear takes a swab from a visitor to test for the Covid-19 coronavirus at a temporary testing station outside a railway station in Seoul on December 16, 2020 as South Korea ramps up coronavirus checks with 150 temporary testing stations erected nationwide amid a surge in infection cases. ( AFP / Jung Yeon-je)


Multiple social media posts circulating in August 2021 claim South Korea has proposed a new bill that would make PCR tests mandatory. However, the claim is misleading: as of September 8, 2021, the bill contains no such reference to mandatory PCR tests. The lawmaker's office that proposed the bill told AFP there was no intention it could be used to compel such tests. 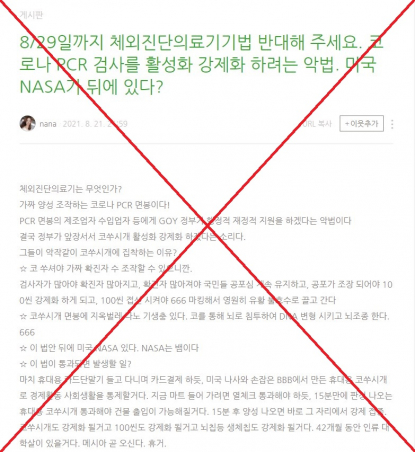 Part of the Korean-language claim translates to English as: "The proposed bill is designed to subsidise PCR swab makers and importers. It is an evil law. The government is taking the lead to make PCR tests mandatory and manipulate the number of the confirmed cases."

The post cites a bill proposed on August 19, 2021 by a group of Seoul-based lawmakers led by Choi Hye-young from the Democratic Party of Korea.

If passed, it would give the South Korean government greater powers to regulate manufacturers and importers of in vitro diagnostic medical devices.

The bill reads in part: "The bill aims to ensure that in vitro diagnostic medical devices manufacturing, importing, and performance tests are safely carried out and to protect the public health".

The post also shared a screenshot of the proposed bill's front page. 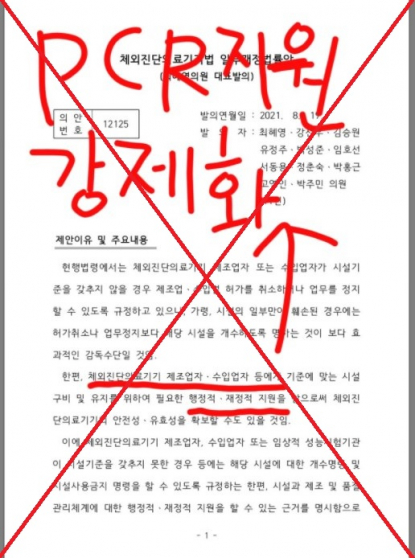 A spokesperson for Choi's office said there was no intention to make PCR tests mandatory with the proposed legislation.

"We would like to stress that there are no mentions of making PCR tests compulsory in the bill or elements that could lead this bill to be used for such practice. There is also no intention of doing so behind this bill," the official told AFP via email on September 7, 2021.

AFP found that as of September 8, the bill includes no reference to making PCR tests mandatory.

In fact, it focuses on regulating the manufacturers and importers of in vitro diagnostic medical devices.

The spokesperson for Choi's office continued: "We learnt that several leading economies around the world set up certain standards to ensure the quality of in vitro diagnostic medical devices, including having manufacturers to equip with facilities to prevent product contamination.

"However, many manufacturers of such devices in South Korea operate on a small scale, which often means they do not have capabilities to prepare these facilities. Given that, we've decided to support them with this new bill".