This photo of 'multicoloured sheep' has been doctored

Facebook posts shared thousands of times purport to show a photo of multicoloured sheep "freshly dyed" by a farmer in Scotland. However, the photo has been doctored; the original image shows a flock of normal, white sheep in the US state of Idaho.

"Freshly dyed sheep run in view of the highway near Bathgate, Scotland. This sheep farmer has been dying his sheep with non-toxic dye since 2007 to make people smile," a Facebook post from March 8 reads in part.

The photo appears to show a flock of sheep painted in a rainbow of colours. 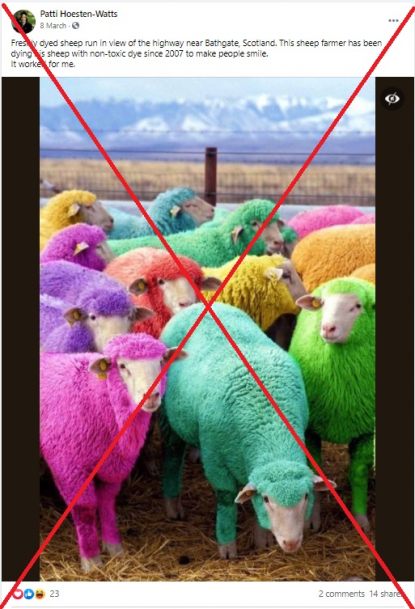 A screenshot of the photo, taken September 1, 2021

The photo has been shared widely in similar Facebook posts, including here, here and in this post shared more than 8,000 times.

However, the image has been digitally manipulated.

A reverse image search found a similar picture on the US Department of Agriculture's website. The picture is identical to the one circulating on social media, except that the sheep are white rather than multicoloured. 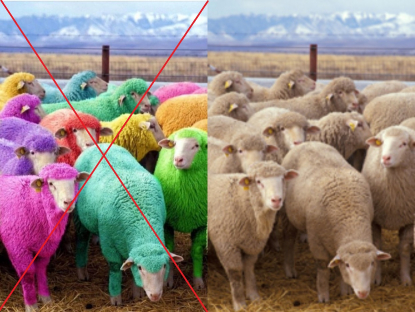 A similar picture of the flock was also published on the Department of Agriculture's website here, alongside the caption: "Research flock at the U.S. Sheep Experiment Station near Dubois, Idaho".

The US Sheep Experiment Station is a facility with thousands of sheep used for agricultural research aimed at improving production efficiency and sustainability of rangeland ecosystems, according to the project's website.

While the image featured in the misleading Facebook posts is not real, farmers have been known to dye their sheep different colours.

In England, one farmer dyed his flock orange in a bid to "stop theft", while another gave his animals a bright pink coat for a music festival.