A video has been shared multiple times on social media with a claim it shows US-made tanks and other military vehicles that have been seized by the Taliban in Kandahar, Afghanistan. The claim, however, is false: experts told AFP the vehicles are not American, and were made in the Soviet Union; and the location in the video resembles a "tank cemetery" in Kandahar where many discarded Soviet weapons are stored.

The post's Korean-language caption reads: "Check out the number of US-made military tanks seized by the Taliban in Kandahar, Afghanistan." 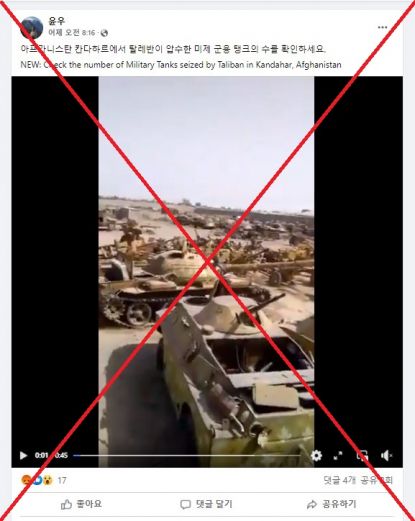 Screenshot of the misleading claim on Facebook, captured September 1, 2021

The video shows various types of military vehicles -- some apparently missing parts -- parked in a dirt lot. Several figures can be seen and heard speaking Pashto, a language spoken by a large number of Afghans.

The claim began to circulate online shortly after the Taliban took control of Afghanistan in August, and after the US completed the withdrawal of its military forces from the country.

Military experts confirmed to AFP that the vehicles shown in the video are Russian-made, not American, left behind from the Soviet Union's decade-long war in Afghanistan.

Moscow invaded in 1979 to support an Afghan communist government in conflict with Muslim guerrilla fighters.

When the Soviets withdrew in 1989, they discarded many of their military vehicles in various locations, resulting in what media reports including the BBC and VICE have called "tank cemeteries" or "graveyards".

Marcel Podhorodecki, a media officer of the 12th Mechanised Division of the Polish Army, told AFP on August 31, 2021 that the vehicles in the video are T-72 and T-55 tanks, BMP-1 infantry fighting vehicles and trucks made by ZiL, a former Russian heavy equipment manufacturer.

Podhorodecki, who has served in Afghanistan, added: "The vehicles [in the video] are not functional. It’s a kind of junkyard. We can see some components [of the vehicles] have been removed."

Ryan Brobst, a research analyst at the Foundation for Defense of Democracies, told AFP on September 8, 2021 that "the vehicles in the video are all Soviet-made and do not show any U.S. military vehicles."

T-55 and T-62 tanks were widely used by the Soviets in the war, according to historical research and reports.

Below are screenshot comparisons of BMP-1 infantry fighting vehicles, T-55 tanks and T-62 tanks from the video shared on Facebook and AFP photos.

Professor Robert Crews, a historian and expert on the conflict in Afghanistan, also told AFP on September 8, 2021 that "all of the vehicles in this video appear to be left over from the Soviets," including several armoured personal carriers.

"The US used M-1 tanks in Afghanistan recently (though not in great numbers, I don't think). But I don't see any in this video," Crews added.

In the video, a Pashto-speaking figure says, in part: "Friends, this is Kandahar's [airport]. These [vehicles] are the things of the earlier Mujahideen."

Fighters from the anti-Soviet Mujahideen helped found the Taliban in the early 1990s.

Tank cemeteries in Kandahar have been mentioned in several media reports, including here by Canadian TV network CTV News.

AFP was able to geolocate the video to a location near Kandahar airport, which can be seen in this satellite imagery from Google Earth. The Google Earth image is dated to November 1, 2017, before the Taliban seized control of Afghanistan. 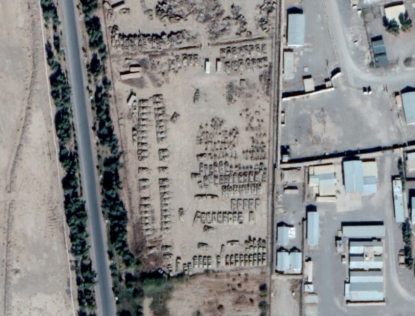 Screenshot of a presumed tank graveyard near the airport in Kandahar, captured September 7, 2021

The layout of the vehicles in the video -- particularly the row of presumed T-55 tanks in front of the tree line -- matches the aerial photo from Google Earth.

This YouTube video, posted by the International Council on Security and Development, a policy think tank, on September 25, 2007, was filmed at a tank cemetery in Kandahar which resembles the location in the Facebook video.

AFP has reported on the seizure of Western arms and supplies by the Taliban in reports here and here.