A video of a "journalist" falling into a stream in the middle of a broadcast has been shared in Facebook and YouTube posts in South Korea that claim it shows a genuine news report. However, the video is intended as a joke; it was originally posted to YouTube by a comedy crew, who told AFP the video was created for satirical purposes.

"A legendary broadcast accident on the nine o’clock news at Cheonggye Stream," reads a Korean-language Facebook post shared on August 20.

The video shows a man who seems to be a news presenter accidentally falling into a stream in the middle of a broadcast on summer city getaways.

Text in the top-left corner features the headline: "Diverse getaways you can enjoy in Seoul". 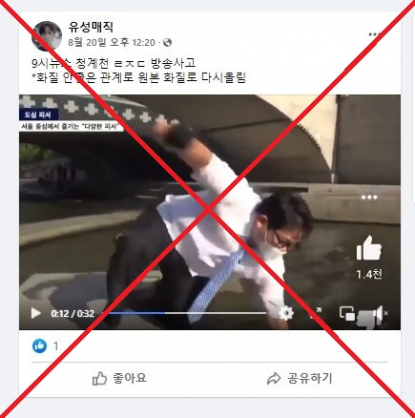 Screenshot of the misleading claim on Facebook, captured August 31, 2021

Comments on them suggest some social media users believed it was a genuine news report.

"I feel sorry for the reporter but I can't help but laugh," wrote one user on Daum Cafe.

"I hope he wasn't hurt," another commented on YouTube.

However, the video was intended as a joke.

The original video can be found here on a YouTube channel run by South Korean comedy team BDNS, which has more than 290,000 subscribers.

The group says on its 'About' page that it makes "hyper-realistic skits and comedy videos".

The group has previously done similar skits mimicking news broadcasts with the same actor, as seen here and here.

A representative for BDNS confirmed to AFP that the video was created by the group and that it was made "for satirical purposes".