This is an old video from a different wedding

"Good wedding dance video. Maryam was Maryam, but his son is four steps ahead of her. Everything is from India -- both suit and dance," reads an Urdu-language Facebook post from August 26.

Maryam refers to Pakistani opposition politician Maryam Nawaz Sharif, whose party has been accused by critics of being friendly with rival India.

The video, which shows a couple dancing, has been viewed more than four million times. 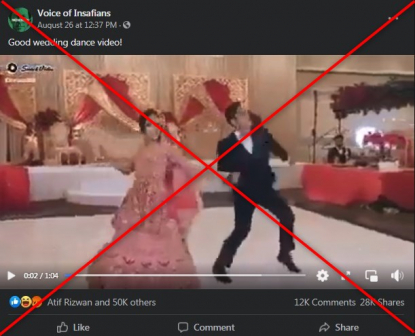 The same video along with a similar claim was also shared on Facebook here, here and here.

The posts emerged after the wedding of Sharif's son, Junaid Safdar, in London on August 22.

However, the claim is false; the video was filmed a year before Safdar's wedding and shows a different couple.

A keyword search found the clip in a longer video published on YouTube on August 11, 2020.

The video, which has been viewed more than 14 million times, is captioned:  "Amazing bride & groom first dance at an Indian & Pakistani/Persian wedding!"

Its description identifies the Instagram profiles of the couple as @therezakhan and @pujatailorkhan.

Below is a screenshot comparison of the video in the misleading post (left) and the 2020 video (right).

The couple have thousands of followers on social media and regularly appear together in Instagram posts.

The same video was also included in this article by UK-based wedding magazine Khush, which claimed that the bride comes from a Hindu Gujarati family and that the groom is from a Muslim Pakistani and Iranian background.