This photo shows a solidarity march in Paris in 2015, not a protest during the pandemic

A photo of a huge crowd has circulated in social media posts that claim it shows people in France "taking back their country". The posts circulated online after France introduced health passes showing Covid-19 vaccination status. The posts are misleading: the photo shows a march in the French capital of Paris after the Charlie Hebdo terror attacks in 2015.

It was posted in a Philippines Facebook group that regularly shares anti-vaccine messages.

The caption reads: “France already did it. When will we?” 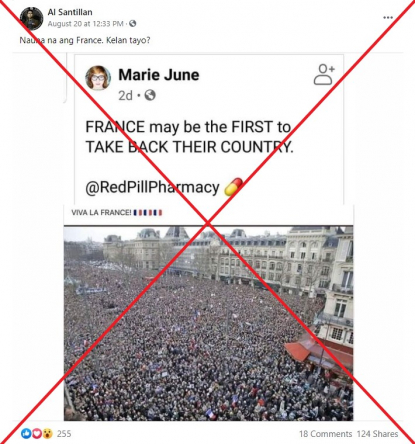 Hundreds of thousands of people demonstrated against the health pass championed by President Emmanuel Macron.

AFP reported on the protests here.

Comments on the post indicated some people believed the photo was related to the pandemic.

“Real enemies need to be exposed before we can attain the needed Filipino 'critical mass" and effect the needed change and mass awakening here,” one misled user wrote.

“From where I am, people are afraid to do that. I’m the only one who is not vaccinated around here,” another wrote.

A reverse image search on Google found the image predates the pandemic.

It was taken in 2015 by photographer Charles Platiau for Reuters news agency:

The photo caption reads in part: "A general view shows hundreds of thousands of French citizens taking part in a solidarity march (Marche Republicaine) in the streets of Paris January 11, 2015... in an unprecedented tribute to this week's victims following the shootings by gunmen at the offices of the satirical weekly newspaper Charlie Hebdo, the killing of a police woman in Montrouge, and the hostage taking at a kosher supermarket at the Porte de Vincennes."

More than one million people marched along the streets of Paris in the rally against terrorism, AFP reported.

The image of the march was taken at the Place de la Republique in Paris.

Other photos in the sequence taken by Platiau on the same day -- such as this one -- show protestors carrying signs related to the Charlie Hebdo attack.