A video has been watched thousands of times on Facebook, Twitter and YouTube with a claim that it shows a man reciting the Muslim call to prayer in a cathedral in Spain. The claim is false: the call to prayer was in fact performed during a concert at Eton College in England in 2014.

The Malaysian-language caption states: "This is a church in Spain that was once called the Mosque-Cathedral of Cordoba. The mosque was converted into a church after the collapse of the Andalusian kingdom but muezzins still come every day at the beginning of the prayer time to recite the call to prayer even though it had been converted into a church.

"...... even though at that time the Christians were praying but they respected him by remaining silent until the end of the call to prayer." 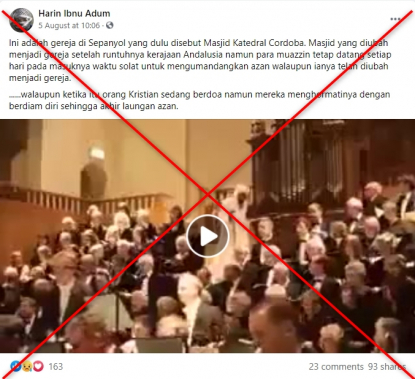 Muezzin refers to a person who is tasked to recite the call to prayer at a mosque.

The Mosque-Cathedral of Cordoba, in the southern Spanish city of Cordoba, was converted into a Christian cathedral in the 13th century. It is also known as the Great Mosque of Cordoba because of its status as a former Islamic house of worship.

The video has been viewed more than 4,400 times after it was shared with a similar claim in Indonesian, Arabic and Somali on Facebook; and in English on YouTube.

It also circulated with a similar claim on Twitter.

A Google reverse image search, using keyframes from the video, found a slightly longer version of the video was uploaded onto YouTube here on December 7, 2014, by Hassen Rasool.

The six-minute, 53-second video is titled: "Hassen Rasool - The Royal Call to Prayer From Eton, England - The Armed Man - Most Beautiful Azan".

The full description of the video states: “The Call to Prayer was performed by Hassen Rasool who was delighted to be asked to perform the Adhan amongst the Windsor and Eton Choral Society in the Eton School Hall on the 27th September 2014.

"The Armed Man by Karl Jenkins with Haydn’s Mass in Time of War was performed to mark the 100th anniversary of the start of World War One, Windsor and Eton Choral Society proudly presented two magnificent choral works with the Adhan (The Call to Prayer) nestled between the two, providing a brilliantly contrasted evening of music and spirituality which was both exhilarating and inspiring."

Below is a screenshot comparison of the video in the misleading post (L) and the genuine YouTube video (R):

The School Hall is part of Eton College, an independent boarding school for boys in Eton, a town in the county of Berkshire, England.

A picture of the School Hall, published here on the Windsor Festival's official website, shows interiors that correspond with those seen in the video.

Below is a screenshot comparison of the video in the misleading post (L) and the photo of the School Hall (R), with matching features circled by AFP:

Replying to AFP, Rasool said on August 28, 2021, that the video "was shot in Eton College in England, and not Spain. The one circulating that says it was in Spain is incorrect."

The September 2014 concert is also documented here on the Windsor & Eton Choral Society's official website, which lists all of its concerts and the soloists since 1985.

Below is a screenshot of the Windsor & Eton Choral Society's website, with relevant parts marked in red by AFP: