Video does not show Putin supporting US probe into pandemic origin

A video has been viewed tens of thousands of times on Twitter alongside a claim it shows Russian President Vladimir Putin pledging his support for a US-led investigation into the origins of the coronavirus pandemic. The claim is false; the clip shows Putin speaking about Russian Covid-19 vaccines in February, months before US President Joe Biden ordered the investigation.

"Russian President Putin today announced his support for the US-led World Health Organization investigation into the origin of Covid-19, and announced a compensation scheme," reads a simplified Chinese-language tweet posted on August 23.

The video -- which has been viewed more than 68,000 times -- shows Putin talking to a group of people in an online meeting. 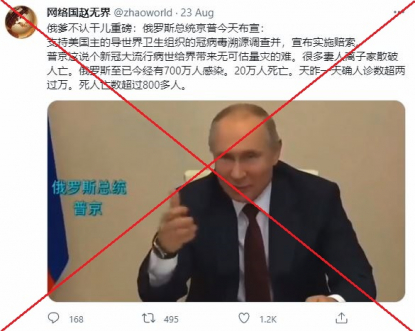 Screenshot of the false claim shared on Twitter, taken on September 1, 2021

In May, US President Joe Biden ordered a probe into the origins of the coronavirus pandemic. A report in August was unable to definitively conclude whether the virus had jumped to humans via animals or had escaped a highly secure research facility in Wuhan.

The same video was also shared alongside a similar claim here and here.

However, the claim is false; the video does not show Putin announcing his support for the investigation.

Speaking in Russian, Putin says, "Thanks to our scientists, Russia has a leading position in the world. I will not say anything unexpected and new, we all know about this.

"[Russia] has a leading place in the world in creating a vaccine against coronavirus. Furthermore, we are the only country in the world that already has three of its own domestically-made vaccines."

A Russian-speaking AFP journalist said he did not announce support for a US-led investigation on the origin of the pandemic.

A reverse image search and keyword searches found the video corresponds to a portion of this news report from February 8 by Russian broadcaster Channel One.

The news report covers Putin's launch of a neutron reactor in Saint Petersburg in a video conference on the Day of Science, which Russia marks on February 8.

In the conference, he congratulated scientists involved in the project and praised the contribution of Russian scientists in the global fight against Covid-19.

Below are screenshot comparisons of the video in the misleading posts (left) and the video published by Channel One (right). 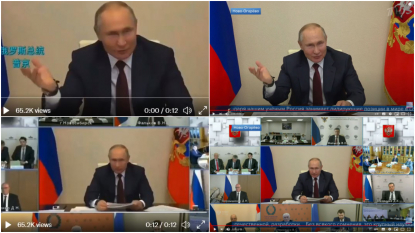