Skip to main content
Then presidential candidate and Davao Mayor Rodrigo Duterte's lawyer Salvador Panelo (C) arrives at the premises of the Bank of the Philippine Island (BPI) in Manila on May 2, 2016. ( AFP / NOEL CELIS)

A video has been viewed tens of thousands of times in multiple YouTube and Facebook posts that claim it shows Philippine President Rodrigo Duterte's legal counsel calling the chief state auditor a "lapdog of the opposition" and accusing the audit agency of accepting bribes. The posts circulated online after Duterte blasted state auditors for highlighting discrepancies in the health department's budget during the pandemic. The claim in the posts is false: a review of the video and its original source shows Duterte's counsel made no such statement.

The misleading video was posted here on YouTube on August 23, 2021.

The clip's Tagalog-language headline translates to English as: "JUST IN: Sec PANELO MERCILESSLY ATTACKED COA Head AGUINALDO/ 'YOU ARE A LAPDOG OF THE YELLOWS!!'".

"Yellows" is a pejorative term used to describe the political opposition, particularly those belonging to the Liberal Party.

The video's thumbnail shows a photo of Panelo alongside an image of Michael Aguinaldo, chair of the Philippine Commission on Audit.

Text written below the photos claims to show another quote from Panelo in the video: "'LOOKS LIKE YOU'VE ALL BEEN BRIBED!!'" 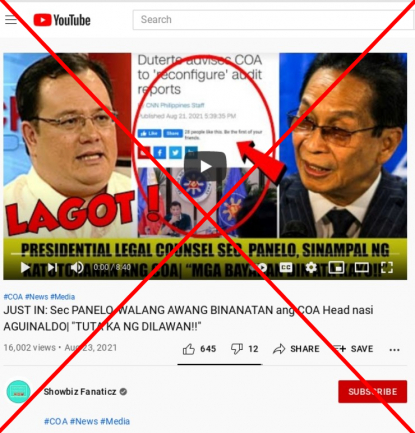 The video circulated online one week after President Rodrigo Duterte blasted state auditors after they found discrepancies in the health department's budget during the pandemic.

His comments can be seen here in a transcript of a cabinet meeting on August 16.

Comments on the video show viewers believed Panelo made accusations stated in the posts.

"The [Commission on Audit] has a political motive. Why are they reporting to the mainstream media? Mr. Panelo is right. It’s so obvious that [they’re] supporters of the opposition," wrote one.

"Aguinaldo is an [Aquino] appointee. [They’re] looking for dirt against Duterte since day one. The Yellows have always wanted to oust [the president] so that they can lead," commented another.

The video has been shared alongside a similar claim here, here and here on Facebook.

The claim is false. The video does not show Panelo making the comments attributed to him.

The secretary's remarks in the YouTube clip can be heard in the episode from the video's 21-minute 50-second mark.

Below is a screenshot comparison of the misleading video (L) and the original footage (R): 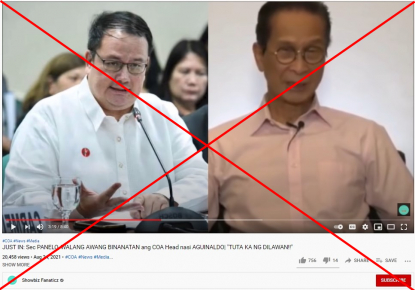 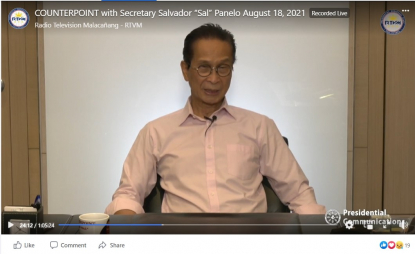 A review of the video found Panelo discussing various topics, including the Covid-19 vaccine and government aid.

Nowhere in the episode did he call chief state auditor Aguinaldo a "lapdog" of the opposition or make accusations of bribery.

"Nope... The [Counterpoint] video speaks for itself," he told AFP on August 25.