This photo shows CNN's Clarissa Ward in Syria in 2012

A photo has circulated on Twitter and Facebook alongside a claim it shows CNN's chief international correspondent Clarissa Ward interviewing a Taliban member as the group swiftly took over Afghanistan in August 2021. The claim is false: the photo was taken in February 2012 and shows Ward interviewing a group of rebel fighters in Syria.

"A CNN journalist interviewed a Taliban fighter #Taliban #Afghanistan," reads the Thai-language caption to this photo shared on Twitter on August 17, 2021. 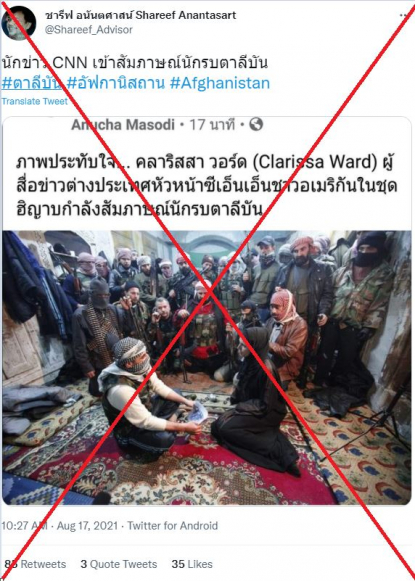 Clarissa Ward is the chief international correspondent for the American television channel CNN.

The photo circulated online after the Taliban swiftly took back power in Afghanistan in August 2021.

An identical photo has been shared alongside a similar claim here on Twitter and here on Facebook by a US-based user.

Her caption to the photo reads in part: "This is one of my favourite photos. It was taken in Idlib City, in Northern Syria, in February 2012 with a group of rebel fighters who called themselves the Idlib Martyr’s Brigade."

Below is a screenshot comparison of the photo in the misleading posts (L) and the photo uploaded by Ward on Instagram (R):

The same photo was also featured in this February 2012 report by public radio station WBUR and this October 2020 report by the American magazine Newlines.

Both state the photo shows Ward reporting from Syria.