A collage of images of four-legged women has been shared alongside a claim the pictures show the historical figure Josephine Myrtle Corbin, an American sideshow performer. The collage is misleading: the two images of a bride actually show a fictional character called Ashley Braistle, who was invented by a fake news tabloid in the 1990s.

The claim was shared by a Papua New Guinea-based user here. 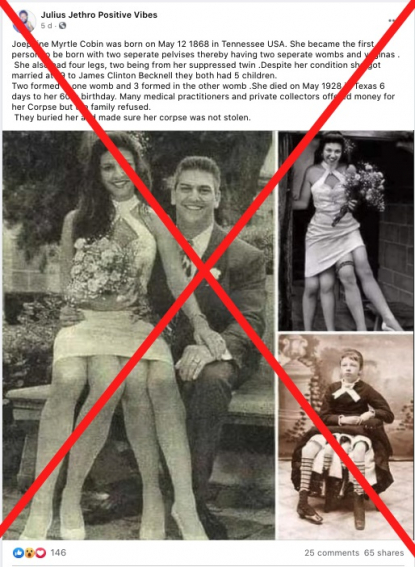 The collage of images shows two photos of a four-legged bride next to an image of a seated young woman who also has four legs.

The caption of the Facebook post claims it shows Josephine Myrtle Corbin, who it says was born in 1868 in the US state of Tennessee.

“She became the first person to be born with two separate pelvises thereby having two separate wombs and vaginas. She also had four legs, two being from her suppressed twin,” the post states.

The images have been shared alongside a similar claim here, here, here and here.

The image collage, however, is misleading.

The images of the four-legged bride featured in the Facebook post were taken from issues of the Weekly World News (WWN), a US newspaper that published fictional and paranormal stories.

The images were published in the newspaper in August 1994 and October 2001.

They accompany a narrative about a four-legged woman called Ashley Braistle who the WWN said found the “man of her dreams” after it advertised she was looking for a husband. The newspaper's authors killed the character off in a skiing accident in the Swiss Alps in 1996.

They later resurrected her for the 2001 issue in which she said of her reported death; "I don't know where they got that story from!"

A Google Books search shows Ashley Braistle was featured in the WWN until at least 2003, for example here and here.

The newspaper reported Braistle was expecting a child featured on the same page as stories about deceased actor John Belushi “haunting a frat house” and US troops guarding the “Garden of Eden from Saddam”. 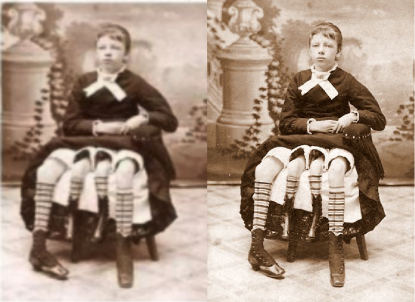 Despite multiple keyword and reverse image searches, AFP could not verify the original source of the image.

It was taken around 1880 by a Joseph R. Applegate, according to the caption on Wikimedia Commons.

However, Corbin's facial features and outfit style show distinct similarities to a photo of her taken by Charles Eisenmann, found in the catalogue of a 2021 auction entitled "Circus Sideshow & Oddities".

According to this Syracuse University inventory of Eisenmann's work, he focused "on the 'freaks' of the circuses, sideshows, and living museums of New York's Bowery area". 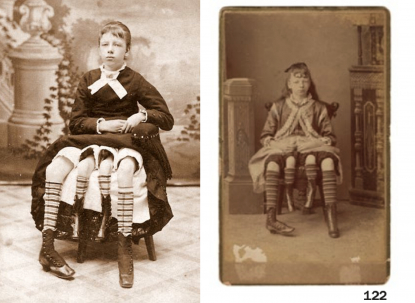 In his 1990 book Freak Show : Presenting Human Oddities for Amusement and Profit, Robert Bogdan wrote that Corbin’s condition came about "from a process similar to that which produces fused twins, only in her case the separation of the two parts of the split fertilised egg was less complete and in other ways flawed" -- resulting in "two small extra legs dangling between her normal lower appendages".

An entry in the 1888 American Journal of Obstetrics detailed a failed pregnancy she suffered around the age of 19.

The journal entry, titled A Unique Monstrosity, was written by Brooks H. Wells, then instructor of gynaecology at New York Polyclinic.

He described Corbin’s dual pelvises and four legs under her medical pseudonym Mrs. B, using notes taken by a Dr Lewis Whaley who treated Corbin.