A message circulating on Facebook, Twitter and Line claims a doctor at Thailand's largest hospital warned people in the kingdom to stay indoors after medics recorded an outbreak of a Covid-19 variant known as Lambda. The claim is false: as of August 26, 2021, the Thai Department of Disease Control said no outbreak of the Lambda variant had been recorded in the kingdom. The hospital that employs the doctors cited in the posts said he had not issued the purported warning.

It translates to English as: "Urgent urgent urgent Dr Prasit has told the public to lockdown their families, as doctors are unable to contain the severe outbreak. Listen carefully and share this message".

"There has been an outbreak, which is probably the Lambda strain. Symptoms include coughing blood and death."

Dr Prasit refers to Professor Prasit Watanapa, dean of the faculty of medicine at Siriraj Hospital in Bangkok.

Dr Prasit has previously been targeted by false claims.

The post shows a screenshot of a message that was shared on Line, one of Asia's most popular messaging apps. 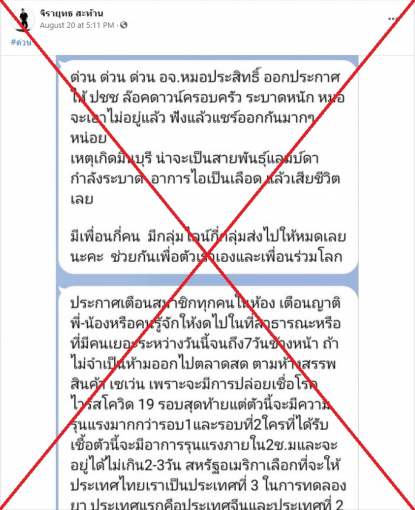 In June 2021, the World Health Organization (WHO) classified the Lambda coronavirus variant as a variant of interest.

Since it was detected in Peru in December 2020, the variant has spread to more than 40 countries in the world, according to data from GISAID science initiative.

Thailand's Department of Disease Control said the Lambda variant had not been detected in the kingdom.

"We have measures in place to determine what kind of Covid-19 strains have been detected," Dr. Kajornsak Kaewcharat, Deputy Director-General of the institute, told AFP on August 25.

"There are no reports of the Lambda strain in Thailand, or in our neighbouring countries," he said.

Thailand does not appear on a list of countries collated by GISAID where the Lambda variant has been detected. 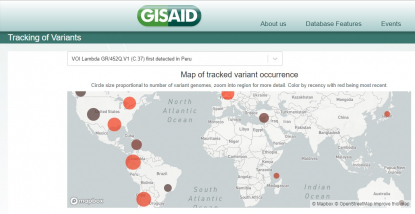 Dr Prasit did not issue the purported warning, Siriraj Hospital's Faculty of Medicine said in a statement on August 1.

The statement reads: "Regarding the circulated claims that Dr Prasit, who is the Dean of Siriraj hospital, has made an announcement to request cooperation from the public to lockdown themselves and their families, due to an outbreak of the Lambda strain, the Faculty of Medicine of Siriraj Hospital would like to clarify that the claim is false information.

"The claim has previously circulated as a voice clip on numerous occasions. We would like to confirm that the claim, both in the format of forwarded text and audio recording, did not come from Dr Prasit Watanapa, Dean of Siriraj Hospital's faculty of medicine".