An image has been shared repeatedly in multiple Facebook posts that purports to show South Korean President Moon Jae-in holding the Japanese national flag and wearing a Japanese anime T-shirt at a public event. The image, however, has been doctored. The original photo, taken during a marathon event in 2015, shows Moon holding the South Korean national flag and wearing a T-shirt with a different design. Screenshot of the misleading claim on Facebook. Captured August 20, 2021.

The Korean-language text embedded above the image reads, "Bow-legs' [a slur referring to Moon] history is more ridiculous the deeper you dig into it."

Identical images were also shared on Facebook here, here, here and here alongside a similar claim.

Comments on the posts suggested several users appeared to believe the image was genuine.

"What!!!! Pro-Japanese [expletive]!!!!," wrote one user. "Why were they walking around like that then?~~~Crazy folks," wrote another.

The post, uploaded on August 15, 2015, includes about a dozen images showing Moon, Park and Lee at the same event, named as the "Namsan Turtle Marathon."

A caption accompanying the photos says the event was held on August 15, 2015 in Seoul's Namsan Baekbeom Square Park.

It was shared on a forum operated by Moon’s supporters on Daum Cafe, a popular social media platform in South Korea.

The original photo can be seen below: 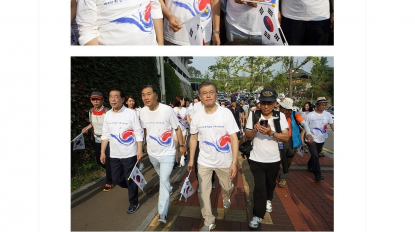 In the original photo, the trio can be seen holding South Korean flags and wearing T-shirts that read: "451th Hankook Ilbo Turtle Marathon".

Below is a screenshot comparison of the doctored image (L) and the original image posted on Daum Cafe (R):

Moon's appearance at the event is corroborated by a photo published on August 16, 2015, by event hosts Hankook Ilbo, a South Korean news agency.

The event was also documented in a YouTube video posted on August 17, 2015, by South Korea's ruling Democratic Party.