Canada mayor did not testify that Covid-19 is a 'hoax'

Social media posts claim Naheed Nenshi, the mayor of the city of Calgary in Canada, testified that Covid-19 is a hoax and suggested he was forced to impose measures to control the spread of the disease. But a spokesperson for the mayor's office said the transcript cited as evidence is fake, and Nenshi has been a vocal supporter of steps aimed at curbing the pandemic.

"CALGARY MAYOR ADMITS UNDER OATH THE C-O-V-I-D was HOAX," says an August 5, 2021 Facebook post sharing a transcript of the alleged testimony. 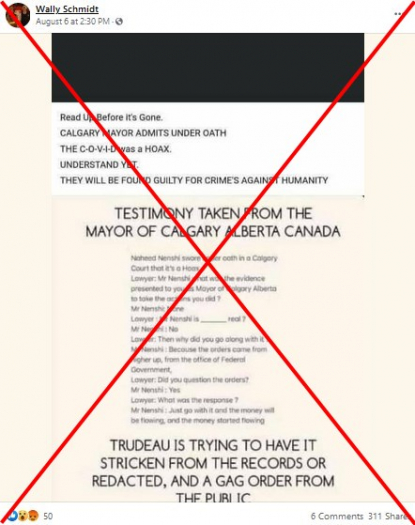 Other examples of the same claim can be found here and here.

The posts say that "Naheed Nenshi swore under oath in a Calgary Court that it's a Hoax."

They also include an alleged transcript of the mayor of Alberta's largest city denying the existence of the disease caused by the coronavirus, and saying that no evidence was presented to him to justify "the actions" he took -- an apparent reference to policies enacted to curb the spread of the virus.

Calgary accounts for most Covid-19 cases in the province. As cases surge, some councillors are pushing to bring back a municipal ordermaking masks mandatory in indoor public spaces that took effect in August 2020 but was lifted about a year later. A State of Local Emergency was declared in November 2020, but was rescinded in June 2021.

The Calgary mayor's team says the transcript, in which Nenshi also says that the orders came from the federal government, is fake.

A spokesperson for the mayor's office told AFP that "none of these 'transcripts' are real," and that the events described in it "never happened."

The posts also claim that Prime Minister Justin Trudeau is trying to censor the information. Contacted by AFP, his office did not reply.

The posts say that the mayor made the remarks in a "Calgary court," but do not specify which one, and a Google search did not yield any relevant news results.

The mayor has been a vocal proponent of Covid-19 public health measures throughout the pandemic, and Calgary was the first major center in western Canada to pass mandatory mask regulations.

AFP Fact Check has examined more than 1,000 false or misleading claims about the Covid-19 pandemic here.