Two photos have been shared hundreds of times alongside claims they show Afghan nationals being evacuated by the US air force after the Taliban seized power in August 2021. The claims are false: the photos have both circulated online since November 2013 in reports about people being rescued from the Philippines after Typhoon Haiyan.

"The last plane to evacuate the U.S. military," reads the simplified Chinese-language caption.

"It is said that those who might face retaliation from the Taliban were all taken away." 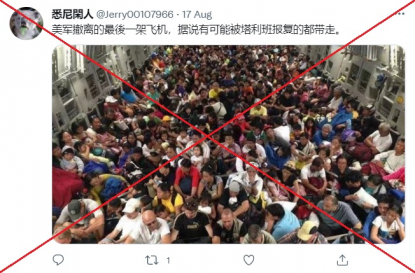 On August 15, the Taliban entered Kabul and took over the presidential palace, sealing a nationwide military victory in just 10 days. After fleeing the country, Afghan President Ashraf Ghani said the Taliban had won, as AFP reported here.

On August 17, the US military said it had evacuated close to 800 people from Kabul, among them 165 Americans, on seven flights.

The photo was also shared in similar Spanish language posts, including here,  here and here.

A reverse image search on Google found the photo was published on this blog on November 20, 2013.

The article states the image corresponds to an evacuation in the Philippines after Typhoon Haiyan.

The text reads: "675 passengers were transported out of Tacloban City, Leyte on the way to Manila yesterday on board USAF C-17."

A keyword search found this November 18, 2013 Facebook post by the Philippines People's Television Network (PTV), a state broadcaster, with credit to the US Air Force.

Another photo of an evacuation from the Philippines after the same typhoon recently recirculated in false posts about Afghanistan in Chinese, Portuguese , French and English. 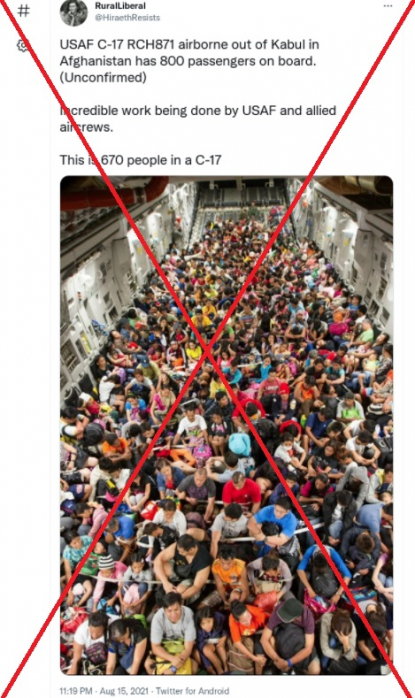 It was originally published here in an US Air Force article.

It states it shows people being rescued from the Philippines by the US Air Force following Typhoon Haiyan. 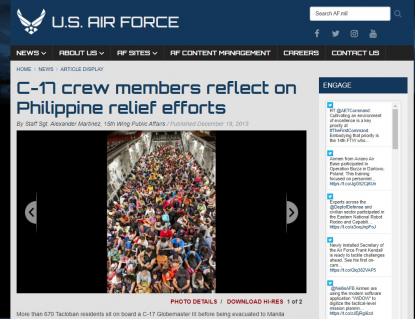 A screenshot of the photo published on the US Air Force website. ( AFP / )

The same photos were previously debunked by AFP in Spanish language here.