Politicians from India's ruling Bharatiya Janata Party (BJP) have shared posts containing two photos of solar power stations that celebrate India's renewable energy achievements. However, the posts are misleading. One of the photos has circulated in reports that state it shows technicians working on a solar power plant in China.

The post contains two photos of solar power farms being inspected by workers.

The caption links to a press release by the government and reads in Hindi: "India achieves milestone of 100 GW of installed renewable energy capacity! 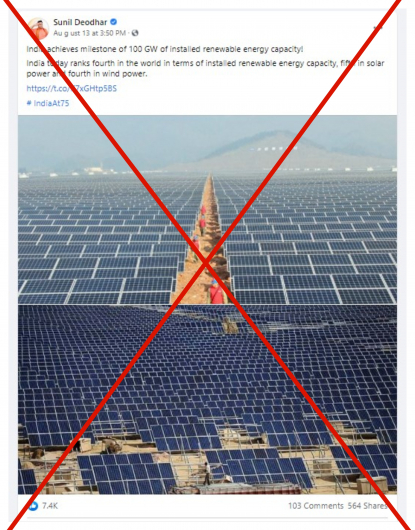 The photos were picked up on Facebook by other users, for example here and here. They were also shared by other BJP politicians on Twitter, as seen here and here.

However, the posts are misleading, as the first photo has previously appeared in reports that state it shows a solar power plant in China.

A reverse image search on TinEye leads to this May 3, 2019 news report about renewable energy in China by Beijing-based media outlet Caixin Global, that contains the same photo. Screenshot of the news report taken on August 19, 2021

The photo can also be seen here on the website of stock photo agency Shutterstock.  The caption reads, "Photovoltaic power station in Xianning, Hubei Province."

It was also published with a similar caption by the state-run newspaper People's Daily here.

A reverse image search on Google confirms that the second photo was taken in India and depicts the Bhadla solar park in the state of Rajasthan.

The photo was taken by AFP photographer Money Sharma and can be found on AFP's website here. The caption to the photo reads in part: "In this photograph taken on August 23, 2015, a general view shows construction taking place at Roha Dyechem solar plant at Bhadla some 225 kms north of Jodhpur in the western Indian state of Rajasthan."

The photo was also used in this news article by Indian news website Mint about the auction of the Bhadla solar park.