These photos are from 2019, not from Thai anti-government protests in 2021

As anti-government demonstrations swept Thailand in August 2021, photos surfaced in social media posts claiming they showed police officers beating a protester in the street. The claim is false: the photos show police hitting and kicking a suspect in Bangkok in 2019.

"Oh, these dogs dragged the guy and beat him up in a private place. They are even worse than yesterday #August17Protest," reads a Thai-language tweet posted on August 17.

The tweet -- shared more than 1,000 times -- features two photos of a group of men, one of whom is wielding a baton, surrounding a man in a white t-shirt. 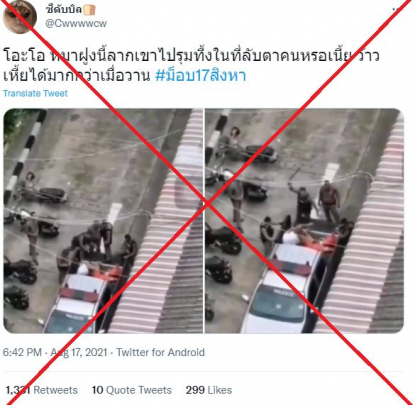 The photos were also shared alongside a similar claim on Facebook here on August 17.

The posts emerged after days of protests, during which police fired water cannon, rubber bullets and tear gas at demonstrators who had gathered around Thailand to demand the resignation of Premier Prayut Chan-O-Cha over his handling of the pandemic.

Although one of the original posters later clarified that the photos were not related to the anti-government protests, many had already retweeted the post alongside a claim that they were, including here and here.

Comments suggest some social media users were misled by the posts.

"This conflict will last for a long time, if the police contradict with Thai people, instead of Prayut's government," one person commented.

"The people just came out to protest as per our rights allow," another wrote.

However, the claim the pictures are from the August 2021 protests is false.

The video's Thai-language description reads: "The video clip was recorded by the general public. It was published through a Facebook fan page and is a video clip of the police assaulting a suspect with his hands tied behind his back as he was sitting in the back of a pickup truck. The caption stated that the incident took place at Lak Song Police Station."

Below are screenshot comparisons between the photos in the misleading posts (left) and keyframes in the 2019 YouTube video (right). 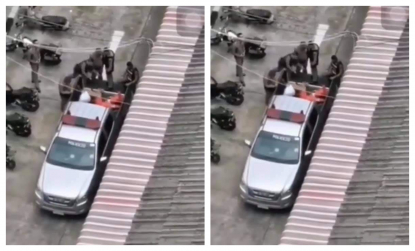 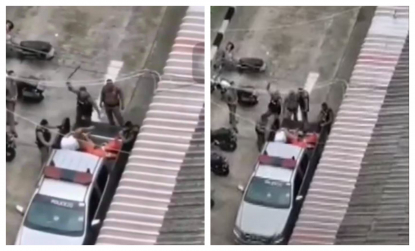 The news anchor reported that one police officer hit the suspect with a baton five times, while another officer kicked him.

A similar set of photos also appeared in this article published by the Ministry of Justice on July 14, 2019.

Details seen in the video, including the location of the plants, the rubbish bin and the red-coloured roof, also correspond to this Google Street View of Lak Song Police Station in Bangkok.