This video of robots 'attacking' shoppers is computer-generated

A video has been viewed tens of thousands of times in social media posts claiming it shows a few "pandemic robots" enforcing mask-wearing rules in a shopping mall. But the claim is false: the video actually shows computer-generated imagery created by a visual artist.

"Pandemic robots are being vigorously promoted in China. This robot stands in front of the elevator in the mall. If you don't wear a mask, you will be beaten up!" reads a simplified Chinese-language Facebook post from July 31, 2021.

The video shows a man approaching a robot, which is holding a temperature scanner. He kicks the robot, before apparently being "attacked" by the machine and two others wielding clubs and hammers. 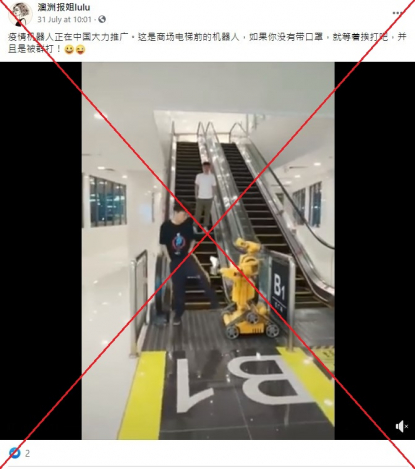 However, the footage in fact shows a computer-generated video.

A reverse image search on Baidu found the same video was posted on July 28 on Douyin, the Chinese version of TikTok, by an account called "Xiaojie Special Artist".

The post is titled, "Robotic mall security, how's this design?"

Below is a screenshot comparison of the video in misleading posts (left) and the Douyin video (right). 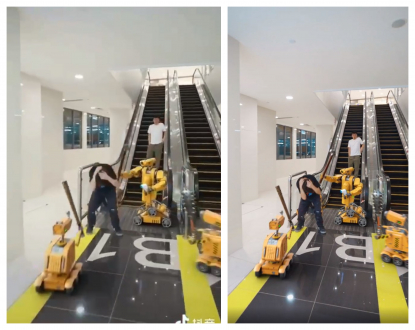 AFP spoke to the Douyin account owner, special effects artist Jerry Li, on August 24, 2021 via WeChat direct message. He confirmed the footage had been created by his team, and said he was the man in the video apparently being "attacked" by robots.

On August 27, another clip was published on Li's Douyin account showing how the animation was created, with a comparison of the computer-generated effects and the original raw footage. It has now been removed but an archived version can be seen here.

Below are two screenshots from the explanatory video posted on Douyin on August 27, 2021. 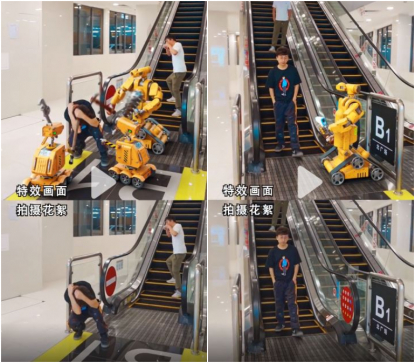 A similar video, which Li confirmed his team had also created, has also been shared on Facebook. An archived version of the explanatory video from Li's Douyin page can be seen here.